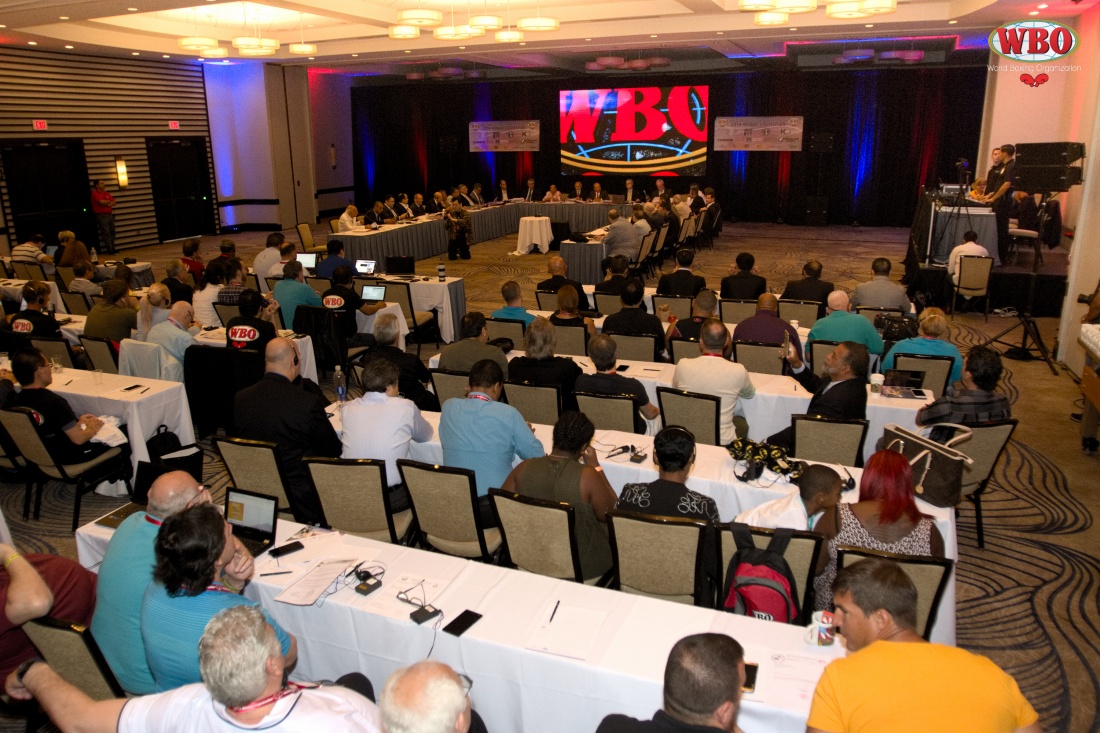 The 29th annual WBO Convention convened today in a place that could only be considered home court for the organization: San Juan, Puerto Rico. But for how long will remain something of a mystery as the WBO took steps to relocate to Florida after a unanimous vote of both the executive committee and of standing members. Although talk of a move was the most significant topic of discussion on the first day of business, there was no shortage of other noteworthy events as the convention kicked off on a sad note as the WBO paid a touching tribute to a man that President Francisco “Paco” Valcarcel called “one of the greatest international matchmakers in the history of boxing.” Hedi Tauab Mohammad was a frequent and welcome face at the WBO conventions over the years and his passing in 2016 was a sad blow not only for the WBO, but for boxing as a whole.

After the memorial for Tauab the WBO proceeded with the election for officials.

Closing off the officer’s election was Enro Lebega who was elected in an uncontested race for the position held by Jacith Bryan Labega, who elected to step down as second vice president. Geno Rodriguez was elected third vice president in an uncontested election taking over for Rudy Paz, who is currently suffering from health issues that prevented him from attending the convention. Adolfo Flores was reelected treasurer in an unopposed election while Rolando Marco Hermoso was reelected fourth vice president.

After the elections Luis Bautista Salas advised the officials present that they needed to take advantage of the ABC certification over the week to ensure that they were in compliance with WBO requirements.

From there WBO second vice president John Duggan introduced a representative from the newly founded Indian Boxing Council, Brigadier P.K. Raja from Bombay, who discussed his long and storied history in amateur boxing as well as his plans for professional boxing in India.

“We are hoping China and India, with their vast history of martial arts, embrace western boxing,” Duggan added. “We can only think of more great things to come.”

The international growth of boxing was further highlighted by the accomplishments of Oskar Canjura of El Salvador, who was proud to announce that after several years of hard work that he was able to get the government of El Salvador to recognize a duly appointed boxing commission in El Salvador.

“As of October 4, 2016 we have obtained the formal approval for the EL Salvador Boxing Commission,” Canjura said. “Yours truly serves as President. This is an effort that would not have been possible without the WBO.”

“I want to thank the WBO,” Labega said. “My organization…our organization. As long as I can be here I will be here.”

“From there some administrative changes were discussed by John Duggan in regards to the WBO Constitution and bylaws, including clarification as to the definition of
purse” and the removal of the grievance committee from the world championship committee.”

After that the pending situation with the tax exempt status (and the possible move to Florida) was discussed before President Valcarcel honored longtime Ohio Gene Glenn, who announced his retirement.

2016 remained a banner year for WBO Latino even as the number of title fights dipped slightly from 35 to 27. However, Hermoso stressed that the quality of the title fights actually increased.

Markus Aslani fooled Koko with his presentation of women’s boxing, stressing that the WBO female title remains a “symbol of quality” in the sport of boxing. He then humbly stepped down as head of the WBO Women’s boxing before nominating fellow Austrian Marion Palatin as his successor. Palatin was overwhelmingly supported by the members of the WBO, who voted her as Aslani’s replacement unanimously.

Panoncillo was followed by NABO head Jose Izquierdo, who presented his report on the state of the NABO. Izquierdo took over the NABO on February 19, 2014 and since his hiring the NABO exploded as one of the bedrocks of the WBO.

“We have been successful in expanding the visibility, legitimacy, and overall appeal of the NABO and Intercontinental brands,” Izqueirdo said. “Today the NABO and the Intercontinental belts are unlike the plethora of secondary titles that diminish the standing of rightful titlist, create confusion and ultimately undermine the public’s confidence in the sport of boxing.”

2016 was indeed a banner year for the NABO as it established a very visible presence in “virtually every weight division.” 20 fights have been sanctions for the NABO title since the last convention (with three more slated in the upcoming month) and 26 intercontinental title matches (with three more scheduled at this time). Both the NABO and the Intercontinental Boxing Organization experienced an increase in revenue since the last convention with $469,445 in cash for the Intercontinental (up from $343,502) and $83,047 for the NABO (up from $70,962 in 2015). Izquierdo then discussed the growing presence of the WBO on social media.

“I am extremely proud that we have a social media presence,” Izquierdo added, before noting that in the last two years the WBO Facebook page has gone up from around 1,000 followers to over 600,000.

However, Izquierdo sadly announced that he was stepping down as NABO and Executive Committee director at the close of his presentation. His replacement will undoubtedly have big shoes to fill, but can rest assured in knowing that the NABO is a thriving branch of the WBO and has been set up for success by Izquierdo.

The Treasurer’s Report followed with the discussion of the overall health of the WBO’ finances, before President Valcarcel gave his President’s report. Valcarcel had two of the attorney’s for the WBO discuss two pending matters starting with the status of the patents and branding of the WBO in Europe. From there attorney Andrew Horn discussed the status of a pending case filed in the State of New Mexico against the WBO. Horn refrained from discussing the parties or the facts of the case since the matter was still pending (for the record it was a lawsuit filed by Austin Trout over his ranking in the WBO) but Horn did express confidence that the WBO would be successful in defending the suit.

Closing out day one was the supervisor’s seminar by John Duggan. Day two will kick off tomorrow at 8AM.