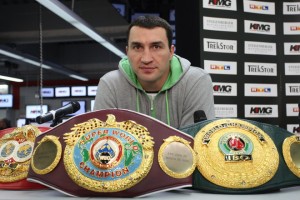 World heavyweight champion Wladimir Klitschko poses during a joint press conference with his challenger Hasim Rahman (not in picture) of the US on December 8, 2008 in Ludwigshafen, western Germany. Klitschko will defend his IBF and WBO heavyweight titles against Hasim Rahman on December 13, 2008. Rahman, 35, is most famous for knocking-out Lennox Lewis in 2001 to win the WBC, IBF and IBO titles, but then lost to Lewis in the re-match seven months later. AFP PHOTO DDP/THOMAS WIECK GERMANY OUT (Photo credit should read THOMAS WIECK/AFP/Getty Images)