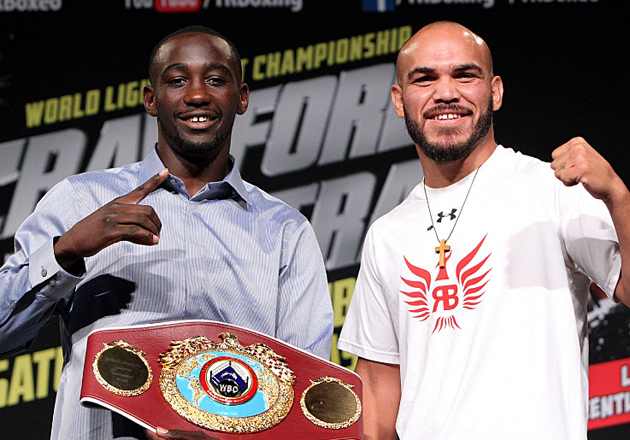 Terence Crawford is THE RING’s No. 1-rated lightweight as well as the WBO’s titleholder in that division. Ray Beltran is THE RING’s No. 2-rated 135-pounder entering a fight whose winner will be crowned THE RING champion in his weight class.

In facing Beltran at the CenturyLink Arena in his native Omaha, Neb., Crawford is returning to the site where he scored four knockdowns on the way to June’s come-from-behind ninth-round stoppage victory over former featherweight beltholder Yuriorkis Gamboa, a previously unbeaten fighter.

Crawford defeated Gamboa before 10,943 of the former’s partisan fans following Crawford’s unanimous decision that dethroned Ricky Burns for the WBO belt on Burns’ turf in Glasgow, Scotland, in March.

Prior to facing Crawford, Burns had battled to a controversial draw with Beltran, who floored Burns in the eighth round in Glasgow in September 2013. Burns’ jaw was badly broken against Beltran, requiring the surgical implantation of titanium plates in advance of the loss to Crawford.

After scoring a one-sided unanimous decision over Arash Usmanee in April, Beltran set his sights on Crawford, Nebraska’s first titleholder since Perry “Kid” Graves won the vacant welterweight crown in 1914.

“I actually felt that Beltran won the fight with Burns but I’m not no judge, so my opinion doesn’t really matter. But in my opinion, I felt that he won the fight,” said Crawford, during an interview with RingTV.com.

“But if he thinks that this belt belongs to him  – and he might feel that way  – then he’s going to have to come and get it and it ain’t gonna be easy because I ain’t gonna give it to him.”

Although Crawford ended Burns’ streak of five consecutive lightweight title defenses, followed by a triumphant effort against Gamboa, Beltran is ready to take what he believes should truly be his.

“Crawford has shown to be a talented fighter and is someone I respect,” said Beltran. “But I see this fight as an opportunity for me to achieve the recognition in the boxing world and the public’s eye. This is my moment.”

The results of the RingTV.com poll taken from 17 insiders regarding Crawford-Beltran are as follows.

This will be a tale of two fights with Ray Beltran’s constant aggression creating several anxious moments. But I see Crawford finding a way to box to the finish and take a mildly disputed decision.

Terence Crawford UD 12 Ray Beltran: Terence Crawford could win at the ballot box in Omaha. He’ll win on the scorecards too. But it wasn’t be easy in a city known mostly for Warren Buffet until Crawford’s attention-getting victory over Yuriorkis Gamboa.

Ray Beltran is a classic gatekeeper. Think Orlando Salido. Beltran, Manny Pacquiao’s favorite sparring partner, has the skill and instinct of a survivor. Beltran’s not afraid of hostile crowds.

Terence Crawford UD 12 Ray Beltran: Unless you’re from Omaha, it would be hard for you to root against either of these two classy lightweight competitors. Terence Crawford is “the next big thing” in Nebraska and for good reason. Crawford’s coming-out party against Yuriorkis Gamboa last June was the stuff dreams are made of as well as a very tough act to follow.

A good solid, professional effort is what fans can expect from the fusion of this pair in the ring. When it’s all said and done, Crawford should retain his WBO title with a competitive but complete unanimous decision. “Bud” Crawford is one of the best young stars in boxing and it will take something more dynamic than what Ray Beltran brings to the table to unseat the defending champion in his own backyard.

Terence Crawford UD 12 Ray Beltran: I’m really looking forward to this one and I think the styles will gel perfectly. I can envision a competitive contest for the first half before Terence Crawford makes the necessary adjustments and dominates down the stretch.

The Omaha native just has so many different looks, whether it be orthodox, southpaw, boxer, slugger, inside game or outside game. Ray Beltran is a class act but Crawford’s versatility will give him a nightmare.

Although I think the Mexican reaches the finish line, he might struggle mightily to get over it. “Bud”, for me, will be in the pound-for-pound ratings, sometime in 2015. He is a terrific fighter.

Terence Crawford TKO 7 Ray Beltran: Terence Crawford’s progression has been frighteningly good to witness. Every performance has been better than his last and his dispatching of Yuriorkis Gamboa was evidence of that.

Ray Beltran is tough as nails but I expect Crawford to again go above and beyond and put together a stirring performance. Ultimately, Crawford’s speed and sound defense will spell the undoing of Beltran.

Beltran’s only chance is to get past Crawford’s jab and work on the inside. But I think Crawford controls the range too well and rips Beltan with combinations until the end mid-fight.

Terence Crawford UD 12 Ray Beltran: The diverse Terence Crawford can beat you in so many ways, which will help him overcome Ray Beltran’s constant pressure. And if Beltran isn’t more careful defensively than usual, particularly in exchanges, Crawford could stop him.

Terence Crawford W UD 12 Ray Beltran: This is an interesting fight with a predictable outcome, given that Terence Crawford is among the most talented young boxers today.

Crawford boasts impressive skills, fundamentals, very good hand speed, footwork and reflexes. During his ninth-round technical knockout over Yuriorkis Gamboa, Crawford demonstrated patience, a decent ring IQ as well as a great ability to make adjustments and to turn a fight in his favor.

Ray Beltran is a solid and hardworking veteran. Beltran will give this bout a last-chance effort and perhaps do better than most expect him to. In the end, I expect Crawford to make the necessary adjustments toward winning a tougher-than-expected unanimous decision victory.

Terrence Crawford TKO 9 Ray Beltran: You’ve got to love Ray Beltran, his honest work ethic, his effort every fight, his backstory. However, it is hard to visualize a path to victory for him in this fight.

Terrence Crawford is a late-bloomer but he is, without question, blooming big-time. He has everything going for him, including what figures to be a maniacal crowd backing him.

Beltran will plod forward and try to do his damage, especially to the body. But he will be out-sped, out-punched and eventually overwhelmed by Crawford. Despite Beltran’s doggedness, he will be stopped late.

Terence Crawford W 12 Ray Beltran: I think the key here is work rate and Terence Crawford is far busier than Ray Beltran most of the time. Crawford’s accuracy and Beltran’s not-quite-there-yet defense make for a terrible combination too.

If Beltran can find a way to Crawford’s body enough to slow him down, which is not easy, then he’ll have a shot. But I don’t think it’ll happen. I see a workmanlike decision win for Crawford.

Terence Crawford W 12 Raymond Beltran: Terence Crawford defeated Ricky Burns earlier this year to win the WBO lightweight championship. Ray Beltran defeated Burns too in 2013 but didn’t get the decision due to some egregious scoring.

Crawford is a talented boxer-puncher. Beltran can punch but Crawford is younger and quicker. He also feeds off his hometown crowd. I think Crawford will win an entertaining 12-round decision over a very determined Beltran.

Crawford’s star is rising and a shopworn veteran like the 33-year-old Beltran doesn’t seem like he’ll be able to get in the way. It’s a spirited fight with Crawford stopping Beltran, who last lost by TKO six years ago.

Terence Crawford UD 12 Ray Beltran: This is kind of a mismatch but Ray Beltran deserves another shot at the title that should have been his after he fought Ricky Burns in 2013.

That being said, Terence Crawford’s talent is a level or two above the likable Mexican’s and he should be able to defeat Beltran by very comfortable unanimous decision.

Terence Crawford W 12 Ray Beltran: Terence Crawford is on his way to becoming an elite fighter but before he can accomplished that, he has to defeat a man who will give his life in the ring.

Ray Beltran wants to become the legitimate lightweight champ. This will be a fight for the fans and I see Crawford taking a close but well-deserved decision.

Terence Crawford UD 12 Ray Beltran: Sports can often be unfair and none are more unfair than boxing. Ray Beltran has been a proverbial “fringe contender” based upon his record but his losses have been seasoned with almost outright robberies. A little over a year ago, Beltran traveled to Glasgow to break Ricky Burns’ jaw and was viewed as a clear victor by many except the judges.

Yet throughout it all, Beltran has fought the opponent in front of him with determination, deceptive skill and entertaining power-punching. Terence Crawford managed to go to Glasgow earlier this year and won a clear, 12-round victory that judges shockingly ruled correctly.

From there, he faced Yuriorkis Gamboa in a virtuoso performance that had Crawford struggling in the early rounds, adjusting his stance to southpaw and began to pick apart the Cuban legend en route to a ninth-round TKO. This is one of my most anticipated fights of the year, with both guys having a crowd-pleasing style via their willingness to engage.

As much fun as Beltran is to watch, I don’t believe he’s got enough tricks in the bag to dissuade Crawford in the pocket where Beltran does his best work. Look for Crawford to control the range on a come-forward Beltran, using his reach and skills to keep the fight on the outside.

Terence Crawford W 12 Ray Beltran: Terence Crawford looks to round out the year with a second successful defense in Omaha, Neb., while Ray Beltran looks to make good on winning a world title he believes he won on the road last September when he drew with Ricky Burns.

Though Beltran had hoped for a rematch against Burns, Crawford got the nod to face him instead and relieved Burns of the title. Beltran will come out fast and try to gain Crawford’s respect but I see Crawford using his speed and skills to counter Beltran on the way to a wide points win.