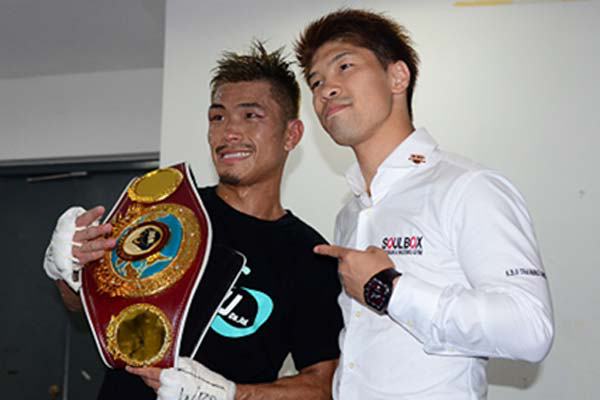 The next world boxing championship fight in Japan will take place on Monday, September 24 at Takeda Teva Ocean Arena in the city of Nagoya, the capital of the province of Aichi, where the Japanese Flyweight world champion of the World Boxing Organization (WBO), the visitor from Tokyo, Sho Kimura (17-1-2 / 10KOs) is going to face the unbeaten Japan’s world # 1 ranked contender and former WBO 105 and 108 pounds world champion Kosei Tanaka (11-0 / 7KOs).

For Sho Kimura, it will be his third title defense, which he conquered in July of 2017 in Shanghai, China, when he defeated by tko in the eleventh round Chinese Shiming Zou, who is a former two-time Olympic champion, and also beat former WBC world champion, and former Olympian Toshiyuki Igarashi through TKO in the ninth round and in his last fight in July 2018 in China, precisely in Qingdao city of Shandong Province, Kimura scored a KO victory in the sixth round over Filipino Froilán Saludar.

Sho Kimura managed to ascend the world throne as the Flyweight king of the WBO in surprise form thanks to his brave and dynamic boxing endowed with endless stamina and durability. It dropped bomb of surprise in world boxing when Sho Kimura ended the reign of Chinese Shiming Zou in China against all expectations. The sports hero of the Chinese people Shimig Zou was victimized by Sho Kimura’s furious attacks.

This occasion, based on his chanting bravery, Sho Kimura is going to defend his title against undefeated local rising double world champion in different divisions Kosei Tanaka, who now calls the powerful intention of Japanese sports journalism to see if this ex-amateur boxer from the city of Nagoya is able to conquer his third world title in his twelfth professional fight to be the world record holder of boxing in order to get faster with less number of fights to become triple world champion in different categories by matching the great Vasyl Lomachenko.

Sho Kimura declares that he will have to finish the fight in high fashion with the attempt of Kosei Tanaka, who is going to throw himself with all surrender to battle with Sho Kimura to defeat him at all costs for the sake of becoming a three-division world champion.

When he was WBO Jr. Flyweight world champion, Kosei Tanaka was able to defend his crown for the first time by defeating by unanimous decision (117-110, 117-110, 116-111) the Puerto Rican Angel “Tito” Acosta, who lost his undefeated, but, now Acosta is the current WBO Jr. Flyweight Champion.

Kosei Tanaka started learning Karate from her childhood as a kinder. When he was the fifth year of elementary school, he started practicing boxing and was a Japanese high school champion.

In 2013, he made the leap to professionalism as a representative of Hatanaka Boxing Gym of Nagoya. His manager-promoter is former world super bantamweight champion Kiyoshi Hatanaka, who was proclaimed super bantam king of the WBC in February 1991 in Nagoya by knocking out in the eighth round the Argentine Pedro Decima and after four months, lost the crown to Mexican Daniel Zaragoza in Nagoya.

Kosei Tanaka was crowned the WBO Mini-Flyweight world champion by winning the Mexican Julián “El Artillero” Yedras by decision in 2015 in the city of Komaki in the province of Aichi for vacant title. Kosei Tanaka won the world crown in his fifth professional fight, which is the mark of Japanese boxing history in terms of the fastest conquest of a world title with less number of matches.

He resigned from the WBO Mini-Flyweight (105lbs) World title to then won the WBO Jr. Flyweight (108lbs) world title in 2016 when he triumphantly came out victorious by TKO in the fifth round over Mexican Moisés Fuentes in the city of Gifu for vacant crown. It was his eighth professional fight with which entered the history of Japanese boxing as a record for becoming fastest two-division champion with less number of fights.

Last March in the city of Nagoya, Kosei Tanaka made his first fight as a flyweight boxer and liquidated by TKO in the ninth round Filipino Ronnie Baldonado.