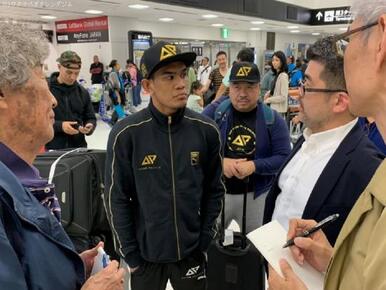 Today, ahead of that bout, Palicte arrived in Japan to acclimatize and put the finishing touches to his preparations. Giving himself just over a week to get used to Japanese conditions.

After arriving at Narita airport today Palicte spent time talking to the Japanese press, who in what was a small press conference at the airport.

The Filipino stated that he was in good condition for the fight, that he was 100% confident he would win and appeared incredibly confident and relaxed. The confidence oozed from the Filipino who predicted a KO win over Ioka and seemed to have no ill effects of jet lag.