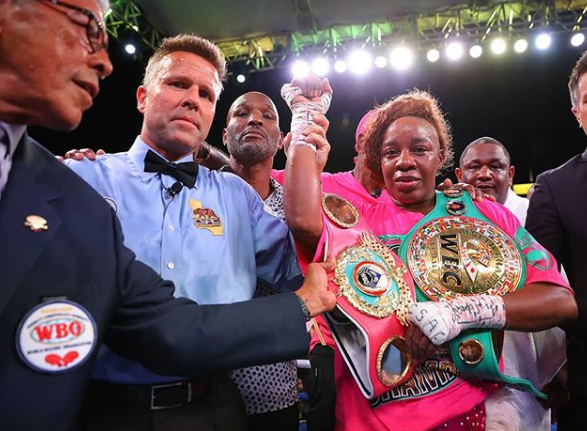 “I’m on edge,” Unified WBO Super Middleweight champion Franchon Crews Dezurn tells me. “I’m ready to fight.” With women’s boxing being on the rise, it’s good for fans to keep in mind that there’s more notable fighters out there than just those named Shields and Taylor. And one of those notable fighters is most certainly Dezurn, who will be defending her titles as the co-main of this Saturday’s Jaime Munguia – Gary “Spike” O’Sullivan card in Texas.

Dezurn’s opponent will be the undefeated, 12-0 Alejandra Jimenez, someone Dezurn feels well prepared to meet. “I’m very well versed in who I’m competing against,” she says.

What makes Dezurn interesting – aside from her considerable achievements in a professional career spanning just over three years – is her engaging personality. For Dezurn is a fighter who keeps moving forward, despite the obstacles. At 6-1, the thirty two year old didn’t let a loss in her first fight impact her. For starters, she was a last minute opponent for none other than Clarissa Shields. What’s more, Dezurn approached the defeat with a positive attitude. “I looked at it as an investment,” she says of the Shield’s bout. “If I would have won, that would have been crazy.”

While Jiminez doesn’t have the pedigree of Shields, Dezurn has no intention of writing her opponent off. “The only way I have made it this far,” Dezurn tells me, “is to bet on myself and to not underestimate anybody.” Part of betting on herself is staying focused, even on off days. “Today wasn’t the best day in the gym,” she says, for instance, “but I kept it strong and positive.” Aside from her skill inside the ring, Dezurn is downright philosophical when it comes to navigating her career. It’s not often, for instance, that an interview subject quotes Bruce Lee’s fighting philosophy off the top of his or her head. Then again, Dezurn is unique.

“What makes me different is I don’t see myself as just a fighter,” she says. “Not everybody has your best interest. Nobody’s going to believe in you like you believe in yourself.” Yet Dezurn also credits her husband, Glenn – a rising fighter in his own right – as being a major support. “My husband,” says Dezurn, “is one of my biggest influences.” Glenn, a super bantamweight, might also help broaden Dezurn’s appeal in a market where fans are always on the lookout for something new and different.

Dezurn-Jiminez will be aired on DAZN as part of the Munguia-O’Sullivan card on Saturday, January 11th.