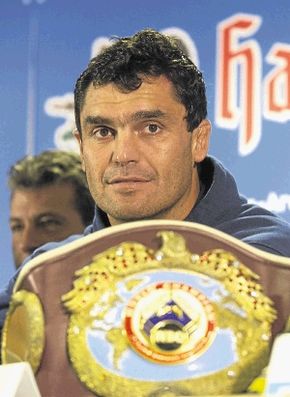 The year 2012 ended on a sombre note with the passing of some prominent boxing personalities like Corrie Sanders and Hector Camacho amongst others, with the saddest of all being the tragic death of Sanders in a shooting incident at a Britz restaurant.

Being a WBO champion, the WBO family was saddened by the news and he received a special mention at the WBO Annual Convention held in Miami in October last year.

I took the opportunity to request that a special commemorative belt be made in Corrie’s honour, which was duly accepted and the manufacture of the belt was commissioned by the Committee at the Convention.

Upon my return to South Africa, I informed Jeff Ellis of the commissioning of the belt and that was when the plan was hatched to get the belt into South Africa in time for the tournament on December 3 at Emperors Palace, Kempton Park and to have the belt auctioned and the proceeds donated to Corrie’s family.

The WBO is honoured to have been in a position to make this contribution in memory of one of their former champions, a man who won the title in one of the biggest upsets in heavyweight boxing against another truly great WBO champion Wladimir Klitschko.

In recent years the WBO has also been privileged to have other African belt holders who have distinguished themselves as credible and worthy champions. Hawk Makepula, Baby Jake Matlala, Dingaan Thobela, Harry Simon have all at some time or other had their names inscribed on a WBO championship belt, and I am hoping that many more African boxers will continue to find their way into the WBO world rankings and eventually fight for world titles.

The WBO Africa title was conceptualized with exactly that in mind, to provide African boxers with a top 15 world ranking and to eventually go on to fight for a world title.

On March 3, 2013 in Windhoek, Namibia he faces the formidable champion from Thailand; Pungluang Sor Singyu who has one suffered only one loss in 44 fights.

In the four years of existence there have been 70 WBO Africa title fights in the following countries: South Africa, Namibia, Ghana, Nigeria, Algeria, France, Australia and New Zealand. African fighters regardless of where they are domiciled are eligible to fight for WBO Africa titles.

At the recent WBO Convention in Miami I was once again elected as Vice President for Africa for a term of four years.

I will continue to serve the interests of boxing stakeholders across the continent and to pave the way for African fighters to take up their positions on the world stage, because we indeed do have the talent pool to do so.

The WBO takes this opportunity of wishing all African Ring readers and the African boxing family at large, a prosperous 2013.