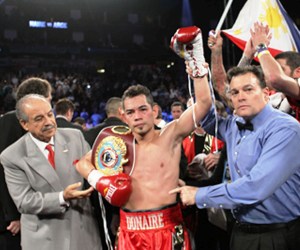 WBO PRESIDENT CONGRATULATES DONAIRE ON HIS ‘FIGHTER OF THE YEAR’ AWARD 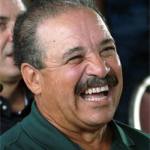 Donaire is the reigning WBO, Ring Magazine and WBC Diamond Belt super bantamweight champion.
Valcarcel also expressed pride in the fact that the fourth fight between Juan Manuel Marquez and Manny Pacquiao last December 8 which Marquez won by a crushing 6th round knockout was chosen “Fight of the Year” by the BWAA.
The WBO crowned Marquez as WBO “Champion of the Decade” for his victory.
Valcarcel said “We (the WBO) want to congratulate Nonito Donaire for this achievement, being elected as the Boxer of the Year. We are proud of Donaire because he is a great champion, one of the best now, and a good person. It’s an honor to have Donaire as our champion”.
Valcarcel also commended Donaire’s trainer Robert Garcia. He said. “I want to congratulate too Robert Garcia for his Trainer of the Year Award. Robert is a good friend of mine, but also is one of the best trainers in the sport. He has a good group of fighters and a good future with them”.
Donaire (31-1, 20 KOs) fought four times in 2012, starting in February with a win over Wilfredo Vazquez Jr., at the Alamadome in San Antonio, Texas when he handily won the WBO super bantamweight title.
In July, Donaire beat Jeffrey Mathebula in his first title defense in the process breakinbg IBF champion Mathebula’s jaw in two places. Donaire followed this up with a spectacular 9th round TKO of Japan’s WBC super champion Toshiaki Nishioka in October and ended the year with a smashing 3rd round knockout of four division Mexican champion Jorge “Travieso” Arce.
Valcarcel said the fourth showdown between Marquez and Pacquiao didn’t let the fans down. The WBO president said “We knew this was a great fight and they didn’t let us down. Pacquiao and Marquez are two legends and in this fight they showed their talent to the world in an exciting fight.”
Valcarcel added, “We are very proud of Marquez and Pacquiao, great WBO champions.”