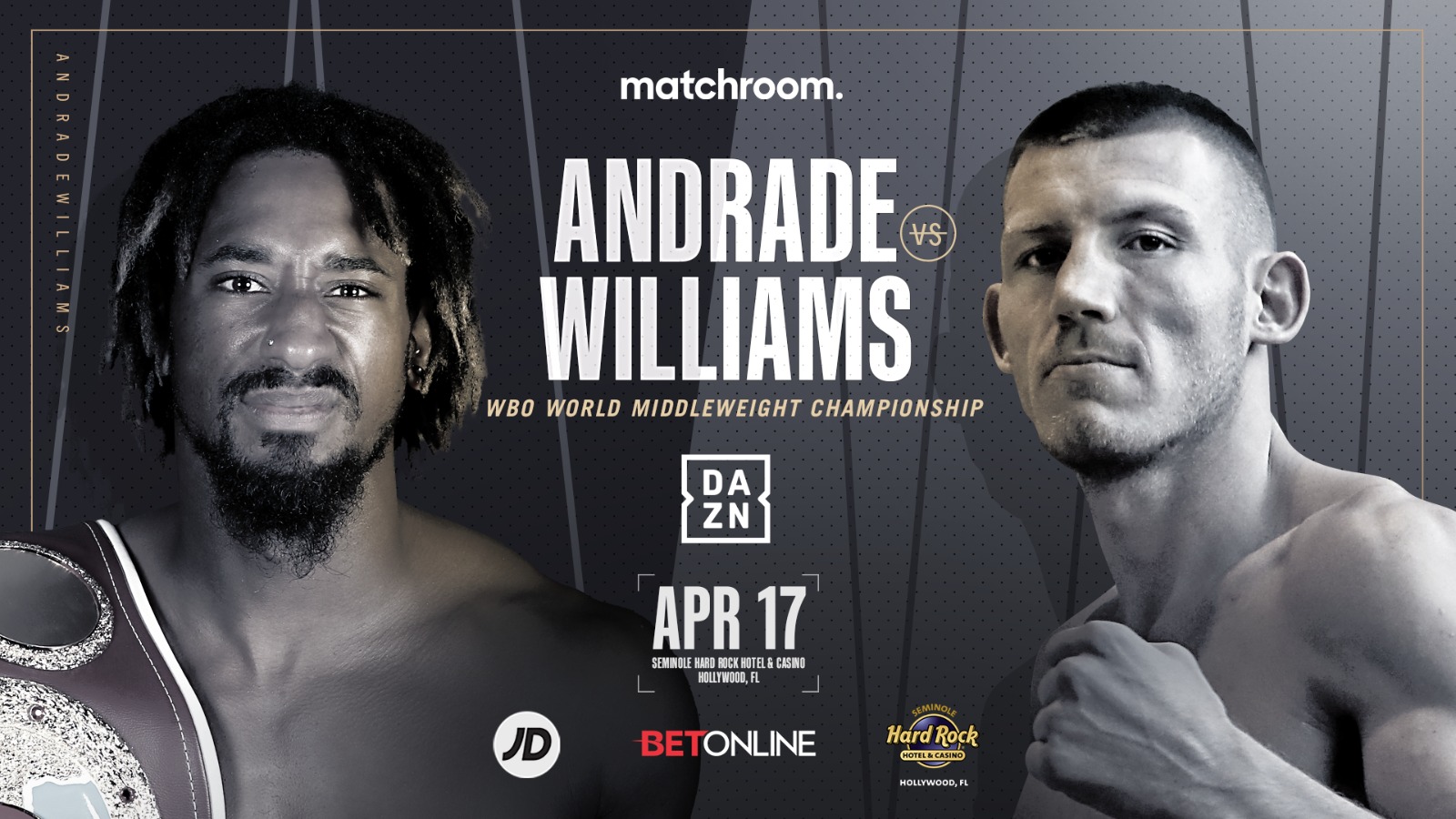 Andrade (29-0 18 KOs) defends his title for the fourth time. ‘Boo Boo’ became a two-weight World ruler when he picked up the vacant strap against Walter Kautondokwa in October 2018 in Boston, and has since seen off Artur Akavov, Maciej Sulecki and Luke Keeler in title defenses.

Williams (23-2-1 18 KOs) fights for his first full World title against Andrade, having met Liam Smith for the interim WBO strap at Super-Welterweight in April 2017, with the Welshman moving to Middleweight after his rematch with Smith and becoming British champion at 160lbs before stopping Andrade’s old foe Alantez Fox in five rounds in December 2019.

“Liam Williams, you got what you wanted,” said Andrade. “You ran your mouth, got your rating up and here we go. April 17 your career ends. Or maybe you go back to headlining small club shows in the UK I don’t know. What I do know is that you’re getting beaten badly and then I’m on to much bigger fights and bigger nights in my career.

“It’s no secret, this isn’t the fight I wanted, but now it’s here and I will be taking care of business, taking care of Liam Williams in spectacular fashion come April 17. Then it’s whoever wants it. Canelo. GGG. Saunders. Charlo. Plant. I’m here. Undefeated. Two division World champion. Current middleweight champion of the world. I dare one of you to say my name.”

“I’ve been quite vocal saying I’ll smash him, and I actually am going to,” said Williams. “I’ve waited for this for too long now, I’m not going to let it slip through my fingers, I’ll grab the opportunity with both hands.

“I just think he’s a complete weirdo, a very strange man – I’ve watched him for some time, I used to be a bit of a fan of him back then, now I get the chance to share a ring with him and punch his face in and I can’t wait to do it. I’m going to punch lumps out of him, nonstop.

“The first couple of rounds could be tricky, but I believe that I will get on top of him and start beating him up.

“I think he might overlook me, possibly. To be honest, maybe he has deserved to get a fight with Canelo, GGG, he’s been World champion for a long time, a two-weight and three-time champion, so he’s probably deserved those fights, but his time is up now and once I deal with him, I’ll get those fights.

“Have you ever seen me going into my shell in a fight? I don’t think he’s going to have enough in him to make me do that, and let’s not forget, he’s not fought anyone like me. When I start hitting him and hurting him, no-one really knows what he’s going to do. Who’s to say he’s not going to go into his shell?”

“This is a really good fight,” said promoter Eddie Hearn. “In America, people don’t realize it’s as good a fight as it is. Liam is a big step-up from Demetrius’ recent opposition, and I think this is the fight ‘Boo Boo’ needs. I like Liam, he’s going to come in with real confidence and swagger and he’ll put it on Demetrius in the build-up, he’s a tough man and he will not take a backwards step against Demetrius, who will need to be at his best to prove he’s the number one Middleweight in the world.”

Early undercard information will be released soon, and no public tickets will be on sale for the show. Open the Canadian casino website and play free online slots or poker.