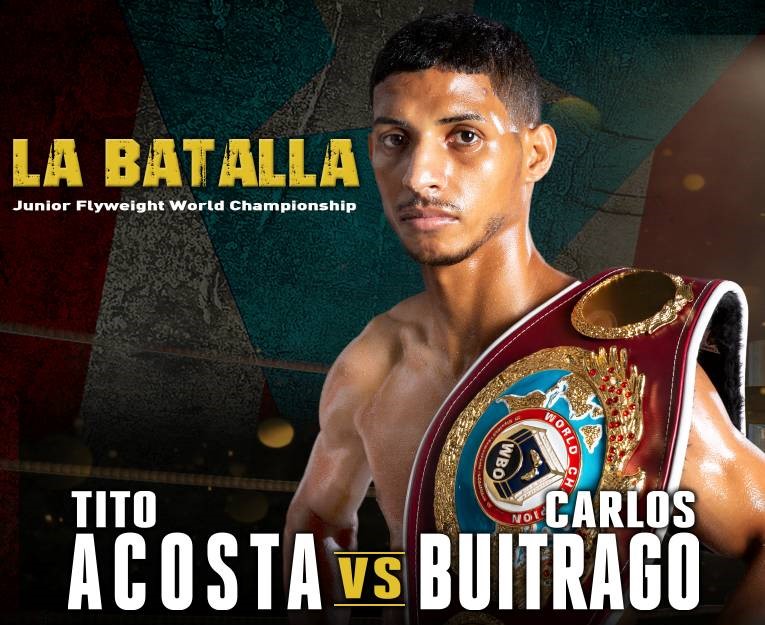 Integrated Sports Media will distribute the La Batalla: Acosta vs. Buitrago card in the United States on cable, satellite and digital pay-per-view via iN Demand, Vubiquity, DIRECTV, DISH and live-streamed worldwide (excluding Puerto Rico) on the FITE.TV app and website (www.fite.tv), starting at 9 p.m. ET / 6 p.m. PT, for a suggested retail price of only $34.95.

Building his own legacy in a traditionally rich, hot-bed for boxing like Puerto Rico, Acosta (17-1, 17 KOs) captured the vacant WBO title last December at famed Madison Square Garden, when he knocked out Juan Alejo (24-4-1), of Mexico, in the 10th round.

“My goal is to be the best,” Acosta said. “I grew-up watching Tito Trinidad and Miguel Cotto, who are my favorite fighters. I will work as hard as I can to give the best to my family, as well as make my island proud. I will win on June 16th and let the world know that I am the best 108-pound boxer in the world.”

Having a future Hall of Famer such as Cotto as his promoter is a tremendous advantage, in and out of the ring, for Acosta. “It means a lot and is an honor for me to have a living legend like Miguel Cotto as my promoter,” Acosta explained. “He has guided my career the best way. He also gets involved in my camp and wants me to get better and better every fight.”

“Tito Acosta is a really good fighter,” Cotto commented about his protégé. “He is World Champion for a reason. We will work to give him the best opportunities. Tito has an opportunity to show the world on June 16th what he is made of and who he is. As World Champion, he needs to be at the highest level to have a brilliant performance each fight, because the better performances and victories, the bigger name he will build.”

“It is important for a fighter to do his job in the ring because every performance is a unique opportunity to show the world who you are and at what level you belong. People in Puerto Rico love boxing, and its fighters.”

WBA #2-rated Buitrago (30-3-1, 17 KOs) will be fighting in his fifth world title fight, after losing three times with one draw. He was stopped for the first time in his last fight this past December, by undefeated International Boxing Federation (IBF) Minimumweight World Champion Hiroto Kyoguchi (8-0), in the eighth round of their title fight in Japan.

All three of Buitrago’s career losses have been to world champions, including a pair to Thammanooon Niyomtrong (11-0) in 2016 and 2014, both by way of 12-round unanimous decisions in Thailand for the Interim WBA title. Buitrago also fought a 12-round split draw in 2013 to then-WBO Minimum World Champion Merlito Sabillo (12-0) in Manila, Philippines.

“Chris Buitrago is a great fighter and tough challenger, who has the highest level of experience, and that motivates me,” Acosta spoke about his Nicaraguan opponent. “People want to watch a toe-to-toe brawl and he brings that style. I think he will brawl with me, but I’ll be ready for any style he brings June 16th.

“I work for the KO (he has 17 knockouts in his 17 wins) because that’s what fans like. I work for that every fight and I will win June 16th by knockout!”

Additional June 16th PPV fights will soon be announced. All fights and fighters are subject to change.