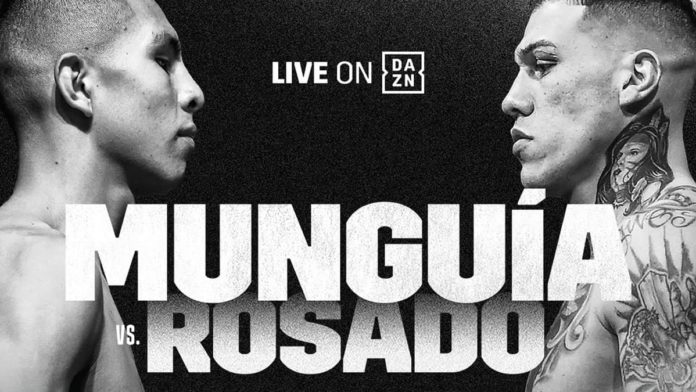 A new chapter will be added to the classic Mexico vs. Puerto Rico rivalry on Saturday, November 13, as Jaime Munguia (37-0, 30 KOs) of Tijuana, Mexico, will put his undefeated record and WBO Intercontinental Middleweight title on the line when he faces off against the Borinquen warrior “King” Gabriel Rosado (26-13-1, 15 KOs) of Philadelphia, Penn. Fight fans, clamoring for an all-out war between two of the most exciting warriors in the division, will get to see a 12-round ‘Fight of the Year’ contender, live exclusively on DAZN worldwide, excluding Mexico.

Additional information on the event will be announced.

“This fight will be full of non-stop action. It will be a war that fight fans will enjoy and a new exciting chapter in the classic Mexico vs. Puerto Rico boxing rivalry,” said Oscar De La Hoya, Chairman, and CEO of Golden Boy. “Both fighters are coming off of spectacular performances and knock-out victories that showed their power, speed, and resilience. Jaime Munguia is a super-star; he has all the elements that make a fighter great. He’s already conquered the junior middleweight division and is on his way to conquer the middleweight division. But this is going to be a big test for him because Gabriel Rosado is a dangerous fighter, he has never backed down from a challenge. He has faced and gone the distance with some of the toughest fighters in the middleweight division. This is truly a ‘Fight of the Year’ contender, a fight that fans will remember for years to come.”

“As always, Golden Boy continues to deliver world-class matchmaking in what’s set to be a brilliant night of boxing in November between Jaime Munguia and Gabriel Rosado,” said Ed Breeze, EVP Rights at DAZN. “After a clinical performance against Szeremeta in June, Munguia puts it all on the line again, this time against a fan favorite and one of the toughest men in the sport of boxing, Gabriel Rosado. We cannot wait to bring this fight to fans around the world, live exclusively on DAZN.”

“Rosado is a dangerous fighter with a lot of experience,” said Munguia. “He is a formidable rival that we have to prepare to be stronger and more intelligent in the ring. He has had the opportunity to fight with great fighters, the best in the middleweight division. I am going to give this fight 100% and as always, give a great fight for fans on November 13.”

“I’m excited about this fight. It’s a fight in high demand,” said Rosado. “I respect Munguia as a fighter and I will bring my best and I am confident I will be victorious. My last fight I think will end up being ‘Knock-out of the Year,’ and I plan on making this upcoming bout ‘The Fight of the Year.’ Time to make history. Team KGR!!”

Ranked as one of the top middleweights in the world, Jaime Munguia will have a big challenge in facing “King” Gabriel Rosado. One of the most exciting fighters to come out of Tijuana, Mexico, Munguia is a rising boxing super-star in the middleweight division. He has already conquered the junior middleweight division with a former world title and five defenses against Liam “Beefy” Smith, Brandon “Bad Boy” Cook, Takeshi Inoue, Dennis Hogan, and Patrick Allotey. Now, Munguia hopes to continue his undefeated streak as he trains under the tutelage of Hall of Famer Erik “El Terrible” Morales as he continues to climb the ranks and prove he is the best at 160lbs.

“King” Gabriel Rosado (26-13-1, 15 KOs) of Philadelphia, Pennsylvania, is coming off of a sensational knock-out victory over the former undefeated fighter Bektemir “Bully” Melikuziev. The Philadelphia fighter of Puerto Rican descent has never backed down from a fight and has delivered some of the most memorable battles in the sport, facing some of the toughest fighters in the division. His experience has prepared him for the upcoming test, as he takes on Munguia on November 13 and hopefully claim the WBO Intercontinental Middleweight title.

Munguia vs. Rosado is a 12-round fight for the WBO Intercontinental Middleweight Title presented by Golden Boy in association with Zanfer Promotions. The event is sponsored by Tecate “The Official Beer of Boxing,” Hennessy “Never Stop. Never Settle,” and “BetOnline – Your Online Sportsbook Experts.” The fight will take place on Saturday, November 13, live exclusively on DAZN worldwide, excluding Mexico.