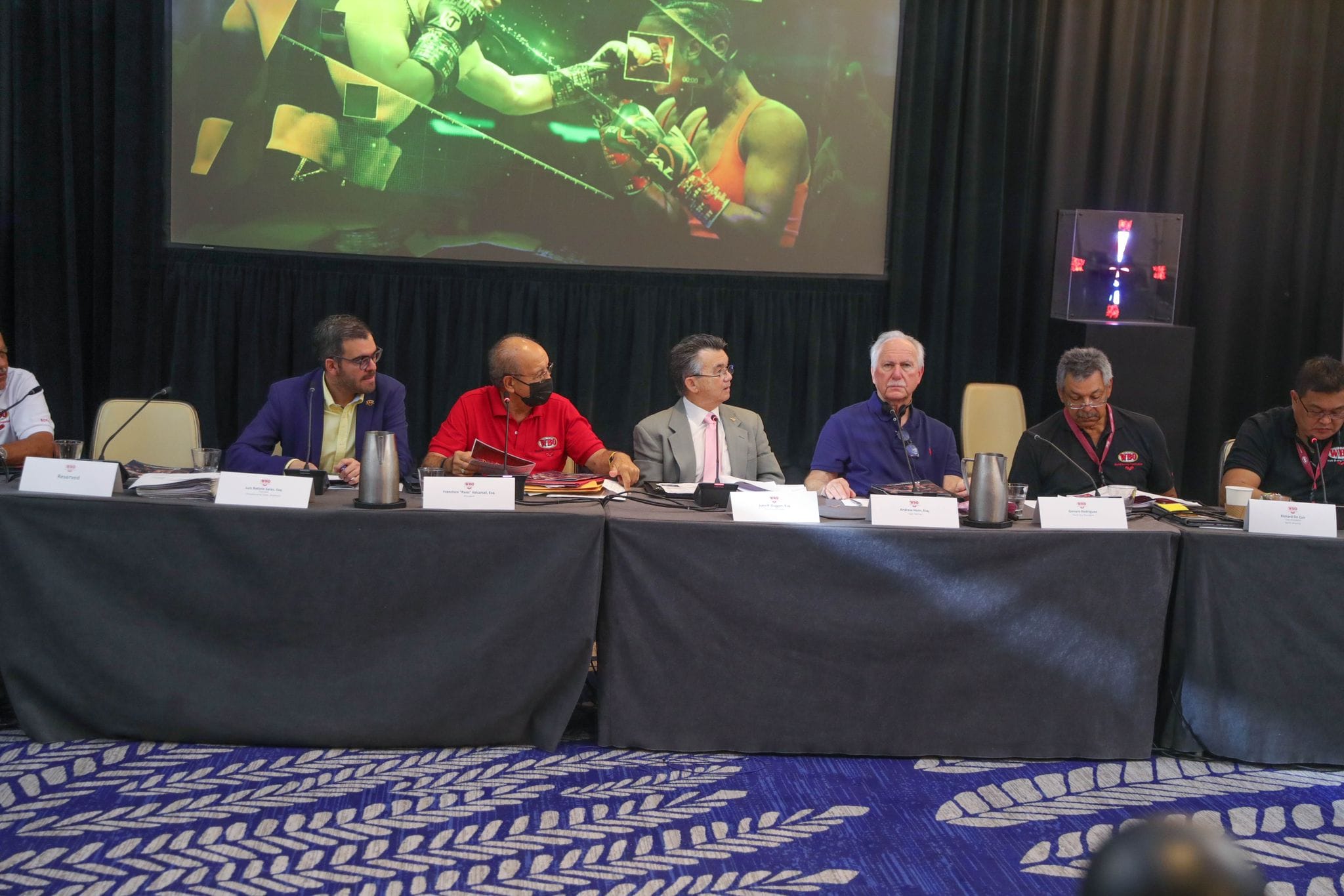 In the ratings meeting, many managers, promoters and even fighters stumped for their positions in their respective weight classes.

Flyweight: Champion Junto Nakatani has renounced his title due to weight-making issues and wishes to be ranked #1 at 115. Now former WBC Super fly champ- Jesse “Bam” Rodriguez has requested to be ranked #1 down at Flyweight. Rodriguez had been formerly ranked #1 by the WBO at 108 lbs before winning the WBC 115 lb. title this year. Rodriguez was unanimously voted to the #1 position at 112 lbs. Representatives for current #1 Cristian Gonzalez voted unanimously to order Gonzalez and Rodriguez to fight for the vacant WBO title.

Super Flyweight: #4 Andrew Moloney lobbied to move to #1 after beating #2 ranked Norbelto Jimenez on the Haney-Kambosos II undercard. It was announced that WBO champion Kazuto Ioka will unify with WBA champion Joshua Franco, with the agreement that the winner fight the WBO #1 within 180 days. The WBO board of directors voted unanimously to allow the unification fight.

Bantamweight: If Naoya Inoue becomes undisputed champion after facing WBO champ Paul Butler on December 13th, he plans to move to 122 lbs, creating a vacancy. Current #1 Jason Moloney is prepared to face current #2 and former champion John Riel Casmiero, but report are that Casimiero is also moving up to 122 lbs. Unranked bantamweight Dylan Price (15-0, 10 KOs) was introduced by promoter Artie Pellulo (Banner Promotions) as a bright prospect who deserves consideration for the top 15 in the WBO.

Featherweight: Champion Emanuel Navarrete has requested to move up and challenge for the title vacated by Shakur Stevenson at 130 lbs. If he wins that title, he will have ten days to decide which title he wants to keep. If he vacates, old foe Isaac Dogboe is ranked #1 and would likely contest the vacant title.

Jr. Lightweight: With Shakur Stevenson vacating, Emanuel Navarrete will be in a position to fight for that title. #4 Liam Wilson and #1 Archie Sharp are set to also fight, perhaps for the mandatory position. #5 NABO champ Albert Bell’s management argues that nobody will fight him.

Lightweight: Representatives for #3 Denys Berinchyk (WBO International champ) lobbied hard for him to be mandatory challenger. President Valcarcel asked Alex Krassyuk (Berinchyk’s manager) if he talked to Sean Gibbons (manager of #2 Isaac Cruz). Alex quipped, “Do you want Denys to fight Sean?” This brought the house down with laughter.

Jr. Welterweight: #1 Teofimo Lopez will fight #10 Jose Pedraza on December 10th. There are many scenarios in play as champ Josh Taylor is supposed to fight Jack Catterall in a rematch, yet to be scheduled. If he moves up as has been mentioned, the vacant title will be in play. #2 Liam Paro desires to be in that mix for sure.

Welterweight: Champ Terence Crawford is defending against #6 David Avanesyan on December 10th. Vergil Ortiz sits firmly at #1. President Valcarcel said the Ortiz-Crawford fight had been ordered by the WBO, but Ortiz didn’t want it at the time. #4 Conor Benn’s failed VADA test was brought up but it remains delicate and the parties didn’t want to discuss as hearings will be underway soon. Issues concerning his license status complicate his rank-ability. Stay tuned for more.

Middleweight: Champion Zhanibek Alimkhanuly will defend against #14 Denzel Bently on November 12. The winner is mandated to fight #1 Jaime Munguia within 180 days.

Jr. Heavyweight: Joe DeGuardia lobbied for previously undefeated Richard “Popeye” Rivera, whose only loss was to #1 Badou Jack via split decision in a fight which has a 3:58 round! #10 Brandon Glanton will face #6 David Light, with the winner being requested to be ranked in the top three.

Heavyweight: President Valcarcel expects that Usyk will face WBC champion Tyson Fury next year. The WBO sanctioned an interim title which was won by Joe Joyce last month. “We never want to stop a unification fight.”

***
A vote was held to determine the site of the 2023 WBO convention. As it stands now, Punta Cana, Dominican Republic won the vote of the board, with Orlando, Florida and the Caribe Royale Orlando Hotel coming in second. However, if an acceptable financial package cannot be delivered in 30 days, then Orlando it will be.