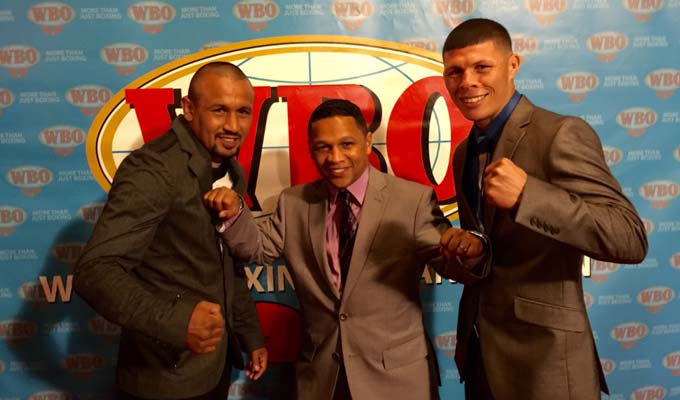 During their annual convention in Orlando, Florida this week the World Boxing Organization approved a third fight between their featherweight champion Roman “Rocky” Martinez and former two-time world champion Orlando “Siri” Salido. Martinez and Salido fought twice in 2015 with Martinez winning a close decision at home in Puerto Rico in april and the second time this past September in Las Vegas their action packed rematch was declared a draw.

Both fights will be candidates for fight of the year and both men earned a third battle to settle who really deserves the belt. In their first battle, Martinez knocked down Salido twice in a route to a unanimous decision victory and in the second fight Salido seemingly dominated the fight was only awarded a draw in a fight that many felt he had won.

“There is no doubt in my mind that I won the second fight, but the judges didn’t see that way. So I think the only right thing to do is fight a third time to determine who really is the best of the two,” said Salido who was in Orlando, Florida along with Martinez.

A third fight is been negotiated for the early part of 2016.

“We feel that he should have gotten the win, but it did not happen that way in September. I’m happy that everyone is working on getting this third fight done, especially the champ and his team and that the WBO is good with it. I know we’ll get it done and it’s going to be another great war,” said Sean Gibbons, Salido’s manager.

The Martinez-Salido rivalry is already being compared to others great rivalry’s in boxing like Israel Vazquez-Rafael Martez and Arturo Gatti-Micky Ward.

“It seems that we are made for each other and the fights are getting better. The first one was good, the second was better and the third will be the best,” said Salido.

And of course it’s Mexico vs Puerto Rico, and in boxing there is nothing better.