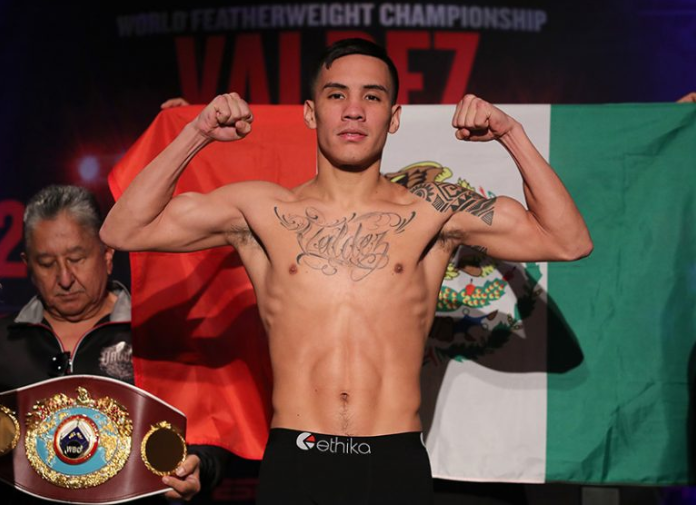 WBO featherweight champion Oscar Valdez (24-0, 19 KOs) in Jalisco is getting geared up to report to training camp on October 1st.

Valdez will begin working with his new training team of Eddy and Chepo Reynoso, who are best known for guiding the career of two-division world champion Saul “Canelo” Alvarez.

Last Saturday, the Reynoso clan secure the biggest win of their coaching careers – when Canelo secured a twelve round majority decision over Gennady Golovkin to capture the WBC, WBA middleweight titles at the T-Mobile Arena in Las Vegas.

Valdez has not fought since this past March, when he beat former world champion Scott Quigg but ended up suffering a fractured jaw.

Valdez could potentially fight in December, according to what manager Frank Espinoza and promoter Todd DuBoef, the president of Top Rank, have said.

“We are going to see if there is a date, they want to fight in December, and if not it will be in January. It is a good challenge and we are ready, we do not know if Saúl will have the fight in December but we already talked about it and there will be no problem,” Eddy Reynoso told ESPN Deportes.

Valdez will defend the featherweight title of the World Boxing Organization he conquered in July 2016 and has already successfully defended four times, including the recent fight in which Quigg did not make the weight and entered the ring with a vary wide size advantage.

Valdez, a two-time Mexican Olympian, is still only 27 years old. While sporting an undefeated record on his ledger, the boxer still hopes to improve on the defensive aspect with Reynoso, who groomed and crafted the defensive style of Canelo from the very start of the boxer’s career.