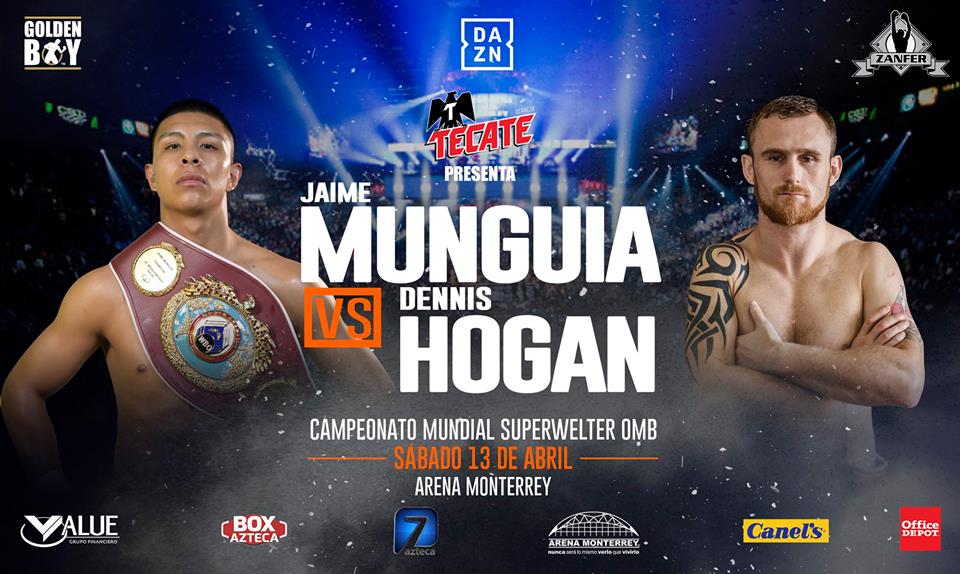 Jaime Munguia (32-0, 26 KOs) will make the fourth defense of his WBO Junior Middleweight World Title when he takes on mandatory challenger Dennis “Hurricane” Hogan (28-1-1, 7 KOS) in a 12-round battle. The event will take place on Saturday, April 13, 2019 at Arena Monterrey in Monterrey, Mexico and will be streamed live on DAZN.

Munguia is a 22-year-old champion of Tijuana, Mexico who catapulted to the highest levels of the 154-pound division by knocking out Sadam “World Kid” Ali in May to capture the WBO Junior Middleweight World Title. Since then, Munguia has defended his title against the likes of Liam “Beefy” Smith, Brandon “Bad Boy” Cook, and Takeshi Inoue. Munguia will return to Mexico after not having fought there since March 2018 in tough challenge in Hogan.

“I feel happy to be returning to Mexico,” said Jaime Munguia.”The last time I fought in Mexico was right here in Monterrey, so I’m excited to be here again. I’m ready to come back and deliver a great show to my Mexican people. It’s also very important to be fighting on this new platform, DAZN. It’s an honor for me to be fighting on this platform. It’s new, but it’s very important. It is the future of boxing.”

Hogan is an Irish contender who calls Queensland, Australia his home. The 34-year-old fighter had his first world title opportunity against “Golden” Jack Culcay in 2015. Though unsuccessful, he would come back from his only loss to win six times in a row, earning him a mandatory shot at Munguia.

“I am looking forward to facing Jaime Munguia on April 13 in Monterrey, Mexico,” said Dennis Hogan. “Mexico’s culture has a rich history in boxing, and I can’t wait to show Mexico and the rest of the world that I am ready to dethrone Munguia. I am not concerned with his power, as I have fought bigger and stronger opponents. My pressure and style are going to give Munguia trouble. I have been fighting for this opportunity since I was eight years old. I’m going to make it count. My team at DDP Sports and Peter Kahn worked hard to get this fight done, and I’m looking forward to bringing the WBO Junior Middleweight title back to Australia.”

“It’s about time that Golden Boy returned to Mexico with one of its most dominant world champions in Jaime Munguia,” said Oscar De La Hoya, Chairman and CEO of Golden Boy. “We’re excited for this endeavor with our partners and co-promoters at Zanfer Promotions as we work hard to make Munguia an international star. I have no doubts that Munguia will sell out Arena Monterrey as people from all over the country come to see him fight. Munguia has also proven to be a fan favorite for fans watching at home, so I expect many fans to tune in on the best platform in boxing, DAZN.”

“This will be Jaime Munguia’s return to Mexican territory after a great campaign in the United States,” said Fernando Beltran, CEO of Zanfer Promotions. “And above all it will take place on a great platform, one that has really changed the sport. It is the platform that has eliminated pay-per-view, and that’s DAZN. He’ll be continuing the strategic alliance that we have with our great friends at Golden Boy. I’m very happy that we will be here together, promoting a great fighter and Mexican star in Jaime Munguia.”

In the co-main event, Brazilian contender Patrick Teixeira (29-1, 22 KOs) will return against Dormedes Potes (11-1-1, 8 KOs)of Barranquilla, Colombia in a 10-round fight for the WBO Latino Super Welterweight Title.

WBO World Champion Arely Mucino (27-3-2, 10 KOs) of Monterrey, Mexico will return in a 10-round flyweight fight against TBA.

Munguia vs. Hogan is a 12-round fight for the WBO Junior Middleweight World Title presented by Golden Boy in association with Zanfer Promotions. The event is sponsored by Tecate, “THE OFFICIAL BEER OF BOXING” and Hennessy “Never Stop. Never Settle.” The event will take place Saturday, April 13, 2019 at Arena Monterrey in Monterrey, Nuevo Leon, Mexico and will be streamed live exclusively on DAZN.

Tickets for Munguia vs. Hogan be purchased online at ArenaMonterrey.com