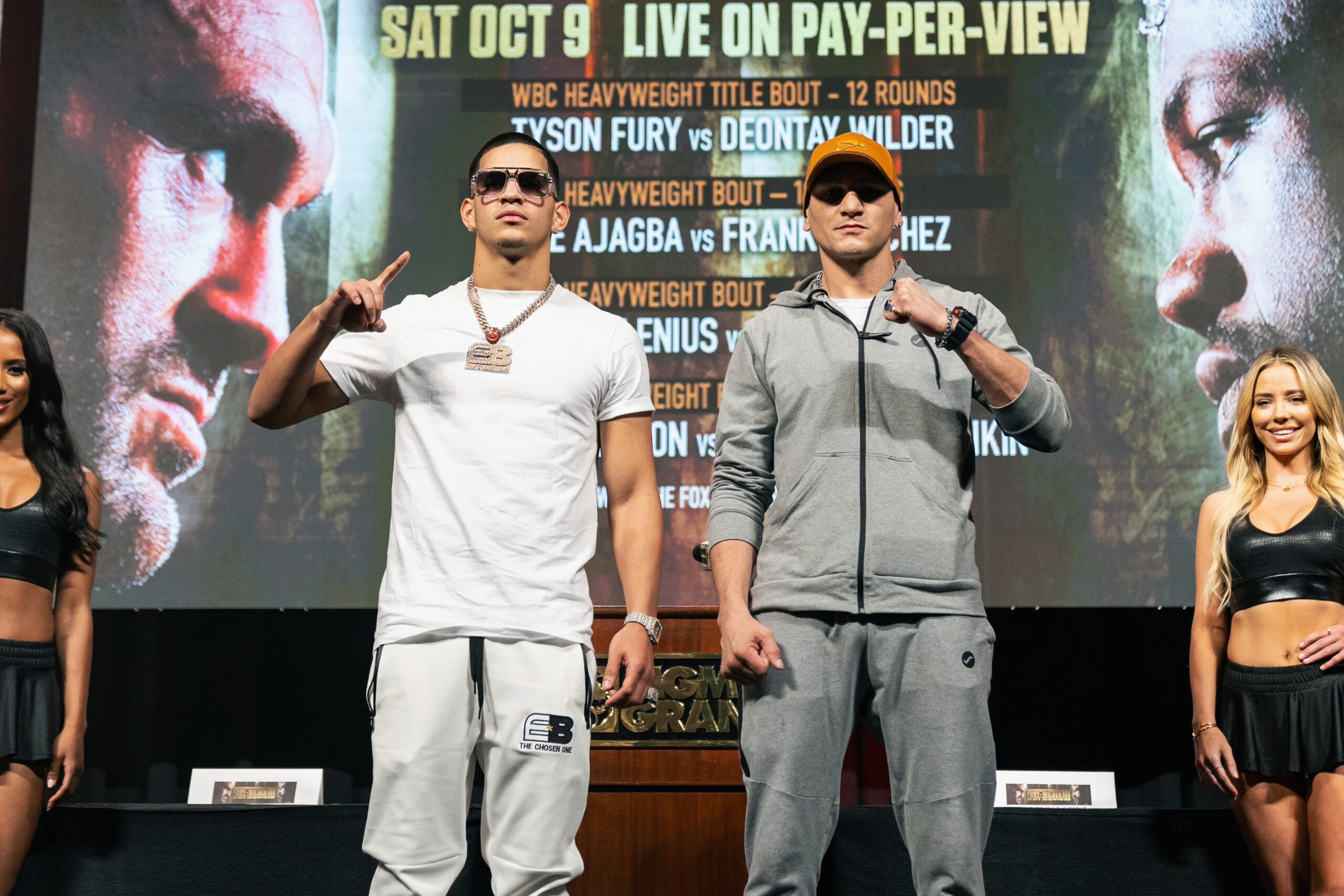 The press conference featured fighters competing on the ESPN+ PPV and FOX Sports PPV that will see 2016 Nigerian Olympian “The One and Only” Efe Ajagba and fellow unbeaten WBO Inter-Continental Champion Frank “The Cuban Flash” meet in the 10-round co-main event, heavyweight contenders Robert “The Nordic Nightmare” Helenius and Adam “Babyface” Kownacki square off in a 12-round rematch and 21-year-old sensation Jared “The Real Big Baby” Anderson and Russian veteran Vladimir Tereshkin battle in the eight-round PPV opener. EFE AJAGBA
“I want to thank my whole team for giving me this opportunity on the undercard for this big heavyweight championship fight. I’m looking forward to Saturday.

“Sanchez made a mistake calling me out, and it’s a huge mistake. He better be ready for what I’m bringing.

“We’ve been working on a lot of new different things that you’re going to see in this fight. If he wants to test my power, we’ll see if he can stand up to it.

“It’s been great to be sparring with Tyson Fury because it gives me a lot of good experience, and I’ve learned a lot from that work. He puts pressure on me to keep moving in the ring and throwing combination punches.”

“This is a massive fight for me, and I’m going to show that I’m a champion and that I’m coming here to win.

“I’ve been looking for this fight against Efe for a long time. I know that I can beat him, and I’m going to win him on Saturday.

“It’s been an excellent experience training with Eddy Reynoso, and I’m learning a lot from him and Canelo. They’ve supported me a lot heading into this fight. Canelo has taught me to be focused and calm in the ring, and most importantly, to have confidence in the work that I put into this fight.

“What I’ve seen is that Efe relies on his power, and he doesn’t have the boxing skills that I do. Once he faces someone like me, who has a lot of different tools, then it’s going to be different for him.”

“It was a blessing to get rounds in during my last fight. I got the experience that I needed. It’s going to help my career knowing that feeling. My power was still there, and we got the job done that night.

“We have a game plan for Saturday, and we’re going to execute it like I always do. We’re not going to the scorecards. Get your popcorn ready and tune in.”

“I’m ready for this big opportunity. I’m happy to be here and ready to take advantage of this chance.

“I’m just coming to bring my fight and execute my game plan. I’m not going to give away too many details, but we’re coming to win on Saturday.

“I don’t like to study my opponents too much. Because they can switch game plans. My team has looked at some of his fights, and we’ve just gone from there.”