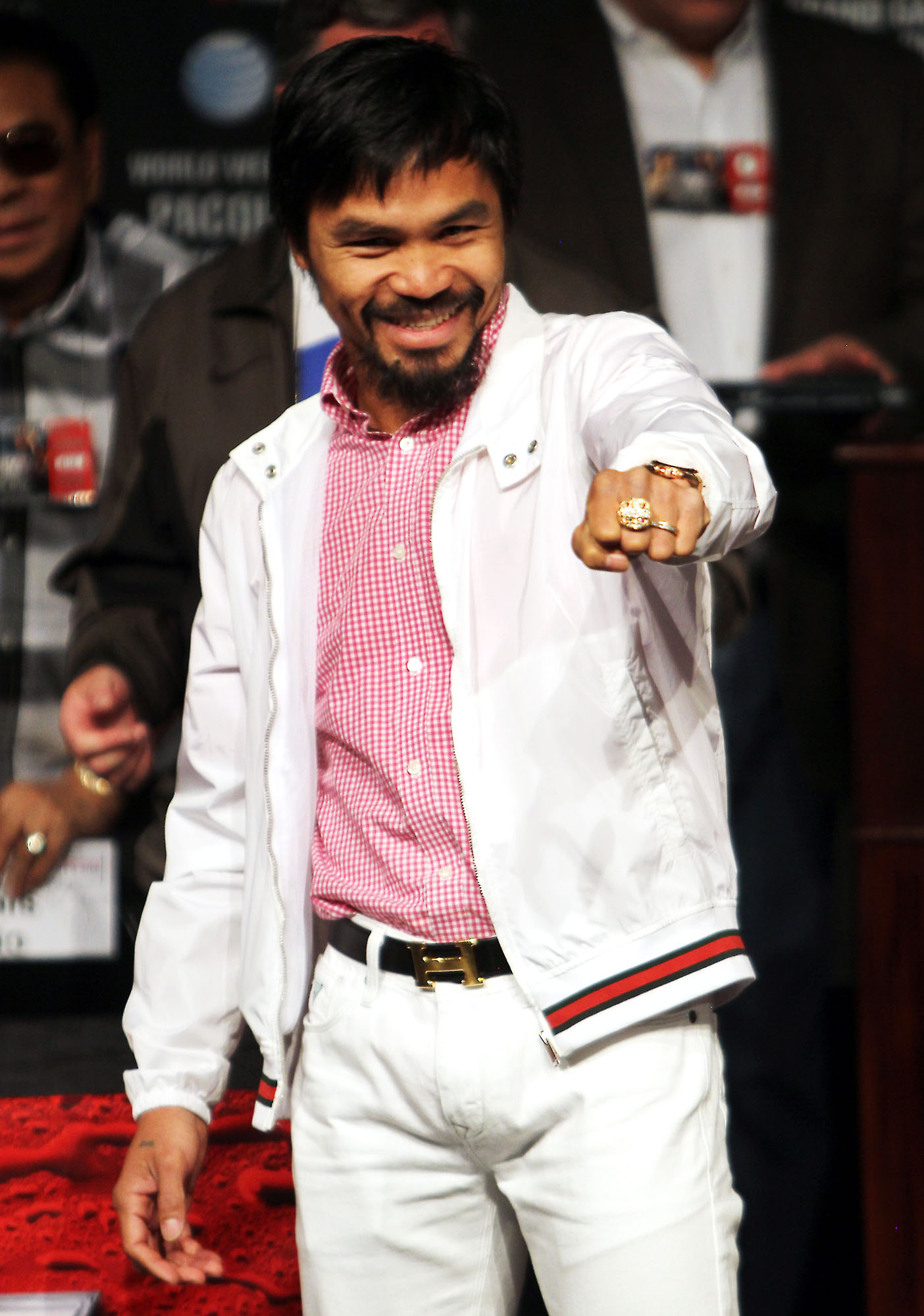 WBO Best Fighter Of The Decade LAS VEGAS, Nev. (PNA) – Filipino boxing hero Manny Pacquiao has been accorded yet another honor – that of being the World Boxing Organization’s “Best Pound-for-Pound Fighter of the Decade.” WBO president Francisco “Paco” Valcarcel announced this during the Final Press Conference of the Manny Pacquiao-Tim Bradley welterweight championship fight held at the Hollywood theater of the posh MGM Grand here.

Valcarcel gifted Pacquiao an imposing diamond ring, in appreciation of Pacquiao’s 10-year heroics, in a simple ceremony inserted in the program with members of Team Pacquiao and Team Bradley, media men and supporters of both camps.

“This diamond ring is being given in recognition of Manny Pacquiao as the WBO’s Best Pound-for-Pound Fighter of the Decade,” Valcarcel said during the award rite.

After the ceremony, Pacquiao walked toward front of the stage showing the ring in his finger to the audience to the delight of the photographers and camera men.

WBO’s recognition came on the heels of the “Fighter of the Decade” honor handed him by the Boxing Writers Association of America, three “Fighter of the Year” accolade, also by the BWAA, and a couple of ESPY Awards.

Both camps, Pacquiao and chief trainer Freddie Roach, on the one hand, and Bradley and chief trainer Joel Diaz, on the other, expressed confidence of victory even as they assured.
Bradley, the reigning unified junior-lightweight champion who is challenging Pacquiao for his 147-pound crown, spoke first, drawing laughter when he said,” I’m ready because I went through a hell of a training camp,” or something to that effect.

Pacquiao, who up to yesterday had been installed a 5-1 favorite ((minus 480 to Bradley’s plus 360) in Las Vegas’ bookmakers odds, fired back saying he, too, has prepared hard describing his cap as “heaven.”

The cocky challenge, showing confidence of a win, showed all the attendees a poster announcing the Pacquiao-Bradley II and a sample of a ringside ticket complete with the date of the fight and the price pegged at $1,200.

He then looked at Pacquiao sitting at his right, shook the Filipino’s hand and said,”I’m ready, I’m ready.”

During his turn to speak, Pacquiao, 33, meekly said he understood Bradley’s feelings, that he knew his challenger is younger and that he also intent to keep his title as he trained like he is 26 years old.

At the backstage though, during the post-presscon interviews, Pacquiao said he’s refuting Bradley’s gimmickry “in Jesus name.”

Roach, for his part, laughed off Bradley’s rematch gimmick, saying, “Well, we thank him for giving us a rematch, but I’m afraid of is that it won’t happen. We’ll make sure of that.”

“As I have been saying, we had a good camp, Manny prepared without distraction whatsoever. We’ve studied Bradley’s fights and realized his strength and his flaws. His problem is how to connect against a fast opponent like Manny. “ he analyzed.

“We studied all his moves, including his tendency to use his heads and we have found a solution to that,” Roach said. “I think Manny will knock him out.”