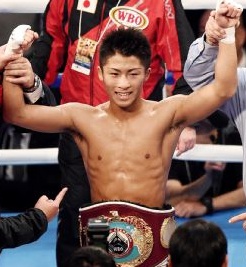 WBO 115lb champ Inoue to be back in August Sensational and superb two-class titlist, WBO junior bantamweight champ Naoya Inoue (8-0, 7 KOs), just 21, had his right hand injury thoroughly examined once again on Wednesday and his manager/promoter Hideyuki Ohashi, former WBC/WBA 105-pound champ, announced that his two-time world champ would be back in August. Inoue is strenuously training with his father/trainer Shingo only with the left hand, but beats up every sparring partner without using the injured right hand.

Inoue is hoped to beat not only the national record of thirteen consecutive defenses now held by ex-WBA junior fly champ Yoko Gushiken (who is inducted into the International Hall of Fame this year) but also seventeen defenses straight all by knockout still kept by the legendary Wilfredo Gomez. Inoue’s strength consists in his power and precision, since his jab is as strong as his opponent’s straight right and his accuracy is superb enough. We are eager to watch Inoue fight soon, but his handler Ohashi cautiously has his vastly talented champ patient until his complete recovery, even though he may be able to defend his WBO belt only with his left hand.