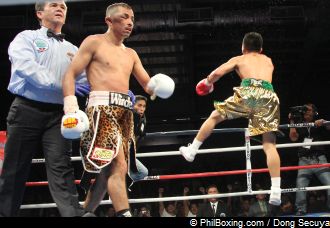 Viloria: “Best Fight of My Career”

Filipino-American World Boxing Organization flyweight champion Brian Viloria punched his way to an eighth round technical knockout victory over Mexican challenger Giovani Segura to keep his 112-pound crown and earn his place in the roster of the finest pound-for-pound fighters in the world Sunday at the half-filled Ynares Sports Center in Pasig City.

Sticking to his game plan of attack-counter-attack all throughout that confused Segura, the 31 year-old Viloria, known in the international boxing world as the “Hawaiian Punch,” proved true to his moniker by implanting a big mouse above Segura’s right eyebrow right in the second round mostly on left hooks that developed into a huge hematoma as the fight wore on.

That same left shot staggered the challenger going into the last 20 seconds of the eighth and as the Mexican’s body looked to turn around led referee Samuel Viruet embraced Segura signaling the fight is over gifting the Ilocos Norte-born and Waipahu, Hawaii-based fighter his 30th victory, his 17th via stoppage in his six-year pro-career.

More importantly, with the win, Viloria accomplished what he really had wanted – barging into the list of pound-for-pound best; an honor he has long been targeting but continued slipping from his hands due to a roller-coaster career.

Viloria, a former amateur standout and a member of the United States Olympic team in 2000, actually, was punishing with volley of left and right combinations earlier in the period before landing the finishing kick to end what he himself described as the best fight of his career, sending Segura, ranked ninth in the world’s best pound-for-pound, to the nearby Medical City Hospital for further checkup.

“Yeah, that was my best fight in my career, Viloria told media men during the post-fight press conference. “It was even better than Miranda ((Mexico’s Julio Cesar Miranda from whom he stole the title last July).”

“It was easy, yes but only because I trained hard for this fight and I stuck to my game plan by not going into the ropes. I just met him in the center of the ring and avoided turning the fight into a brawl in which he (Segura) is at his best,” he said.

“He has heavy hands, but he didn’t hurt me. I often saw his punches, prepared to avoid them, then counter-attack,” he said drawing concurrence from his American manager Gary Gittelsohn.

“That was a fight between the two very best flyweights in the world and it’s a pity the U.,S. missed hosting it,” Gittelsohn said, who added, his ward might stick it out in the 112-pound category although plans are also afoot to invade higher divisions.

“We’ll stick it out in the flyweight division, but we might also try to test the waters, say in the 115-pound class,” the manager said.

Except for two rounds – the first and second, which Malaya Business Insight scored as draw, all rounds were Viloria’s convincingly.

Viloria wound up with a slight cut in his left eyebrow inflicted in the second round and a swollen left cheek but was never really threatened as he repeatedly pummelled the former WBO and World Boxing Association light-flyweight kingpin with crispy lefts and rights to the elation of the crowd that included Filipino icon Manny Pacquiao and former two-division champ Gerry Penalosa. Judge Danrex Tapdasan saw the fight, 69-64 at the time of the stoppage , judge Ulysses Glen,70-63, and judge Harry Davis, 68-65, all in favor of Viloria.