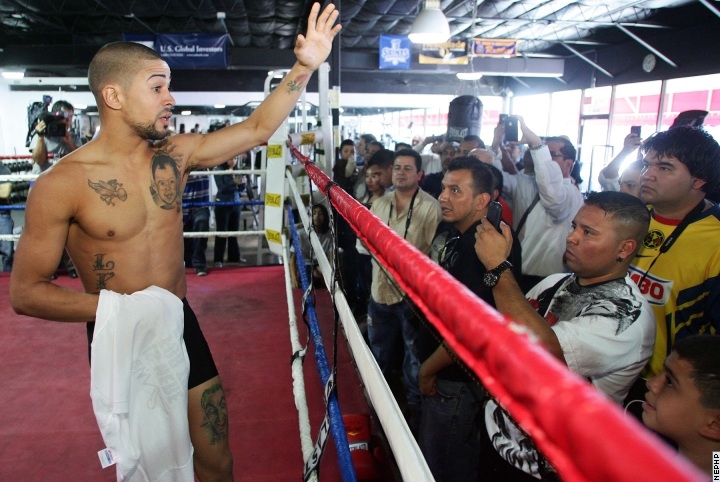 Wilfredo Vazquez Jr. and Nonito Donaire made quite the scene on Friday afternoon when the two prizefighters came face to face, jawing at one another, during the final press conference to promote their bout this Saturday night.

Donaire and Vazquez face off on HBO for the vacant WBO junior featherweight belt inside of the Alamodome in San Antonio, Texas, and the fight has seen a little spice added to it over the past few days because of a war of words that broke out between both sides on their personal Twitter accounts.

The drama displayed today underlines how much tension will be in the air come fight night when these two meet and there is pure confidence coming from both sides.

I caught up with Vazquez moments after the presser had ended and tried to get a feeling where his mind is at with such a pivotal clash just a few days away.

“It’s probably the most important fight of my career,” Vazquez would tell me through his co-promoter Felix ‘Tutico’ Zabala of All Star Boxing. “With this fight I will be in a position a lot higher than what I think. And I prepared myself with confidence to do it.”

Vazquez was a hot commodity coming into 2011 but saw his stock fall after an upset loss to Jorge Arce in May that saw him storm out to an early lead after scoring a 4th round knockdown but eventually wilt under the Sinaloa fighter’s pressure. Bludgeoned along the ropes in the twelfth rounds, Vazquez saw the fight waived off by referee Joe Cortez. He concedes that it was the Arce performance that lead many to doubt him.

“Absolutely, yes,” Vazquez agreed. “That was a learning experience for me. I proved to myself that I can do a better job and this is my opportunity to prove it.”

And while not giving away any of his secrets that come along with his bold prediction of a knockout over the once-beaten Donaire, all Vazquez could do was stress that he will be ready when the moment presents itself.

“I’m going to win no matter how. I’m going to do my job round by round. When I have him ready, something will happen,” Vazquez stated.