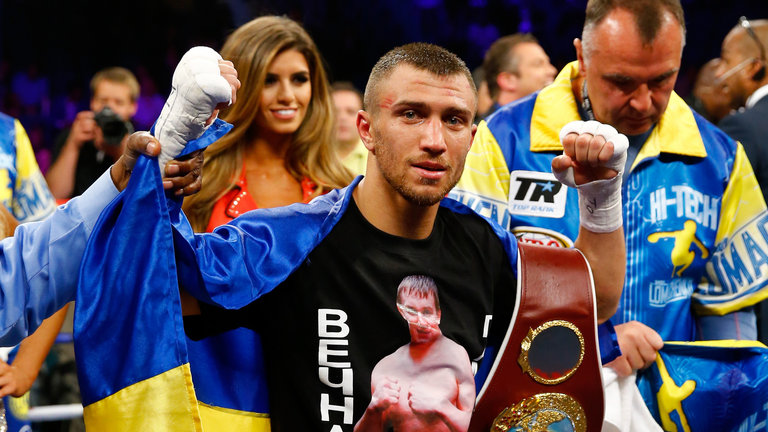 The Ukrainian superstar controlled the fight from the start ahead of Timothy Bradley and Brandon Rios’ showdown at the Thomas & Mach Center, parading his undoubted talent in regular and fluent bursts before finishing it off in the 10th rounds.

A succession of unanswered punches saw Koasicha in trouble before a left to the stomach, followed by a brutal one to the ribs, left him on his knees and unable to beat the count.

Lomachenko (5-1-KO3) kept the WBO featherweight title that he picked up on his second professional fight in 2013 but the Seoul Olympic gold medallist is already looking to show his skills on bigger stages.

“I want to bring something new to boxing,” Lomachenko said.

“I want to be known to fans and appreciated as a ‘boxer-painter’ in regards to speed, footwork, punching power – an art form inside the ring.

“I have looked at videos of many great champions like Muhammad Ali, Sugar Ray Robinson and Joe Frazier who each had special qualities.

“I never say one particular fighter is the best ever because each has a special unique style of fighting.”

Promoter Bob Arum hinted at a showdown with Guillermo Rigondeaux, who has been stripped of both his super-bantamweight world titles and is now up in the lightweight division with Lomachenko.

Another former 122lb champion, Leo Santa Cruz, has also moved up while there is still talk of Lomachenko giving Gary Russell Jr a rematch, having beaten the American ace in March 2013 to become a record-breaking world champion.