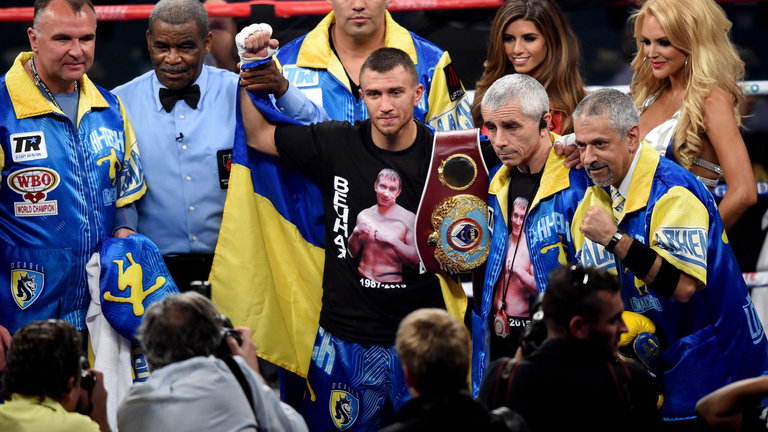 The Ukrainian amassed a freakish amateur record of 396-1 before turning professional in 2013 at the age of 25.

Having won the WBO world featherweight title in his third fight in the paid ranks, Lomachenko is moving up to challenge the same governing body’s 130lb champion Martinez (29-2-3-KO17). Roman Martinez is the man defending against Lomachenko

If Lomachenko justifies favouritism and seizes the Puerto Rican’s crown in New York, he will have a short timeframe to decide which division he wishes to compete at for the foreseeable future.

In an interview reported on boxingscene.com, his promoters at Top Rank said: “Vasyl Lomachenko is the featherweight champ. He will enter the ring as champ.

“If he is victorious in challenging Rocky Martinez and winning the WBO 130lb title, he’ll have 10 days to decide what weight he will be campaigning at. If he loses or fights to a draw, he’ll return to his featherweight reign.”

Lomachenko, 28, said: “I’ve never had a problem making featherweight. Of course, it wasn’t easy but it also was never an issue. As far as moving to 130, I got tired of waiting for the other champions, none of whom wanted to fight me.

“I’m hopeful that with the move to 130lbs will come better fights, particularly against the other champions so we can make our dream of becoming undisputed champion.”