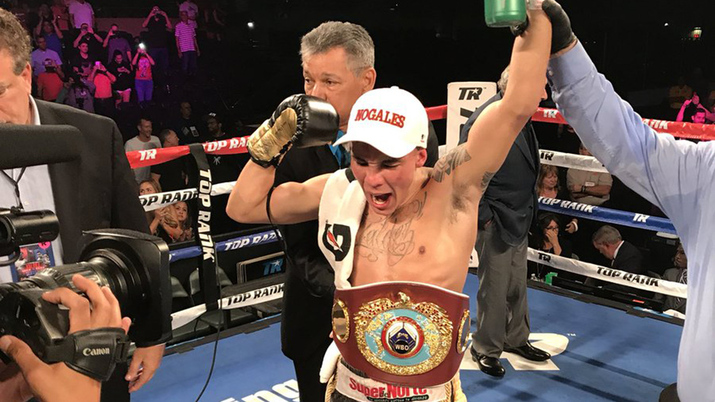 Valdez: This title stays with me in Mexico

Oscar Valdez expects a toe-to-toe battle when he squares off against veteran Scott Quigg, Saturday, March 10, at the StubHub Center in Carson, California. Valdez fights are never short on drama, and the StubHub Center — nicknamed “The War Grounds” by Timothy Bradley — has been the site of numerous Fight of the Year-caliber contests. Valdez (23-0, 19 KOs), from Nogales, Mexico, will be making the fourth defense of his World Boxing Organization (WBO) featherweight title against Quigg (34-1-2, 25 KOs), a former World Boxing Association (WBA) super bantamweight champion from Bury, England.
“For this fight, I did the hard part of my training in Guadalajara, and I think it has been one of the best preparations of my career because I trained so calmly and so peacefully,” Valdez said. “We are more than ready to go to war and defend the title at all costs on March 10. Here in Los Angeles, we are putting the final touches on our preparation. We are doing very well with the weight. Now I’m just focused on the fight.”

Quigg turned pro in 2007 and, like Valdez, soon developed a reputation for fan-friendly fights. He has won three in a row since dropping a split decision to Carl Frampton in a February 2016 title unification bout.

“We know him very well, and we know that his style in combination with mine is the perfect storm that will give the fans a great show and a good night of boxing under the stars of the battleground known as the StubHub Center,” Valdez said. “I’m ready for another war at StubHub.

“This will be my fourth world title defense, and I have learned a lot from my battles against warriors like MiguelMarriaga and Genesis Servania. Now, I have an even more difficult fight against Scott Quigg. We are well prepared for whomever. This title stays with me in Mexico. ”

Promoted by Top Rank®, in association with Matchroom Boxing, remaining tickets priced at $206, $104, $53 and $27.50, including facility fees, can be purchased online at AXS.com, by phone at (888) 9AXS-TIX, or by visiting the StubHub Center box office.

The Valdez vs. Quigg world championship event will be televised live and exclusively at 10:30 p.m. EST on ESPN and ESPN Deportes and streamed live on the ESPN App.

Valdez: This title stays with me in Mexico