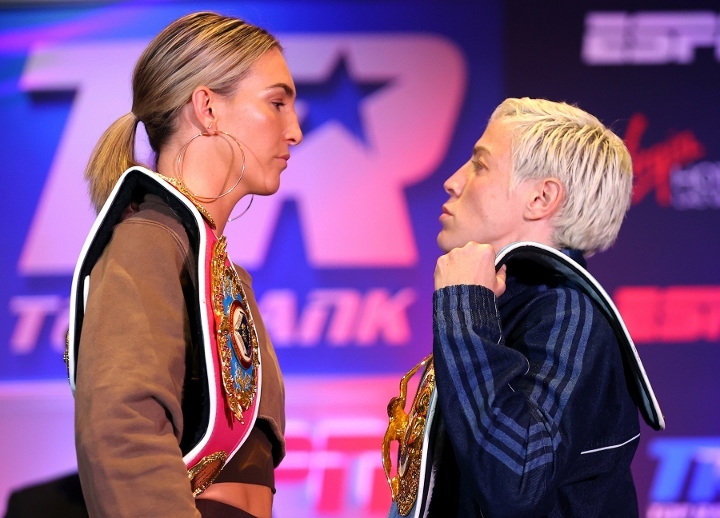 WBO Junior Lightweight world champion Mikaela Mayer wants to make more history. Mayer will take on longtime IBF world champion Maiva Hamadouche in a title unification tilt this Friday, Nov. 5 at The Theater at Virgin Hotels Las Vegas. This will be the first time a female world title bout has headlined a Top Rank on ESPN card since the most recent incarnation of the series debuted in July 2017.

Mayer (15-0, 5 KOs), ranked No. 5 on ESPN.com’s pound-for-pound list, is making the second defense of the title she won in October 2020. Hamadouche (22-1, 18 KOs), from France, has defended her title six times and is unbeaten since a 2015 decision loss to Belgian star Delfine Persoon.

Before Mayer enters the ring, Top Rank Knockout and Miss Nevada 2019 Tianna Tuamoheloa will perform the national anthem. Mayer will also have some rocking reinforcement accompanying her to the ring. Modern guitar legend Nita Strauss will perform Mayer’s walk-out song. Mayer and Strauss were teenage bandmates in Lia-Fail, a punk rock group that featured Mayer as its bassist.

At Wednesday’s press conference, there was little music but a lot of talking. This is what Mayer, Hamadouche, and Top Rank chairman Bob Arum had to say.

“This is terrific for women’s boxing. It’s great that the best women in any weight class are facing each other.”

“We have to look at other sports. The one that comes to mind immediately is the one where women’s participation is the same as men’s. In professional tennis, women play a game and it’s the same point-scoring as men. By keeping it at two-minute rounds, you are telling the world that women’s boxing is different. If we are worried about health issues, do three-minutes rounds and regulate the number of rounds that women can fight.” “My mindset is that I’m here to challenge myself to the best of my ability in this fight and for the rest of my career. She has been a champion for six years, but in all that time she didn’t even push for a world title unification bout. I had to go out there and be very vocal and push hard to make this fight happen.”

“This is the biggest fight of my career. This is my chance to show that I’m the best fighter in my division. Winning this fight and performing very well will put me as the top player in the division. One fight at a time, but since I became a world champion, we are looking at big fights only.”

“We know her style. She is right. She is aggressive, and I haven’t faced someone as aggressive in my professional career, but I have faced plenty of styles as an amateur. We are prepared for it. If she thinks she is going to bully me, that will not be the case.”

“Talking from experience, that extra minute could change a fight. You could have more knockouts and more finishes.”

“This is an exciting opportunity for me. I have defended the title on multiple occasions and now this is a great opportunity to unify world titles.”

“I believe my experience will be the difference. I’m very aggressive and very physical. I will come at her like no other fighter has come at her before.”

“I think that fighting at three-minute rounds will be very good for me. That’s exactly what I want.”