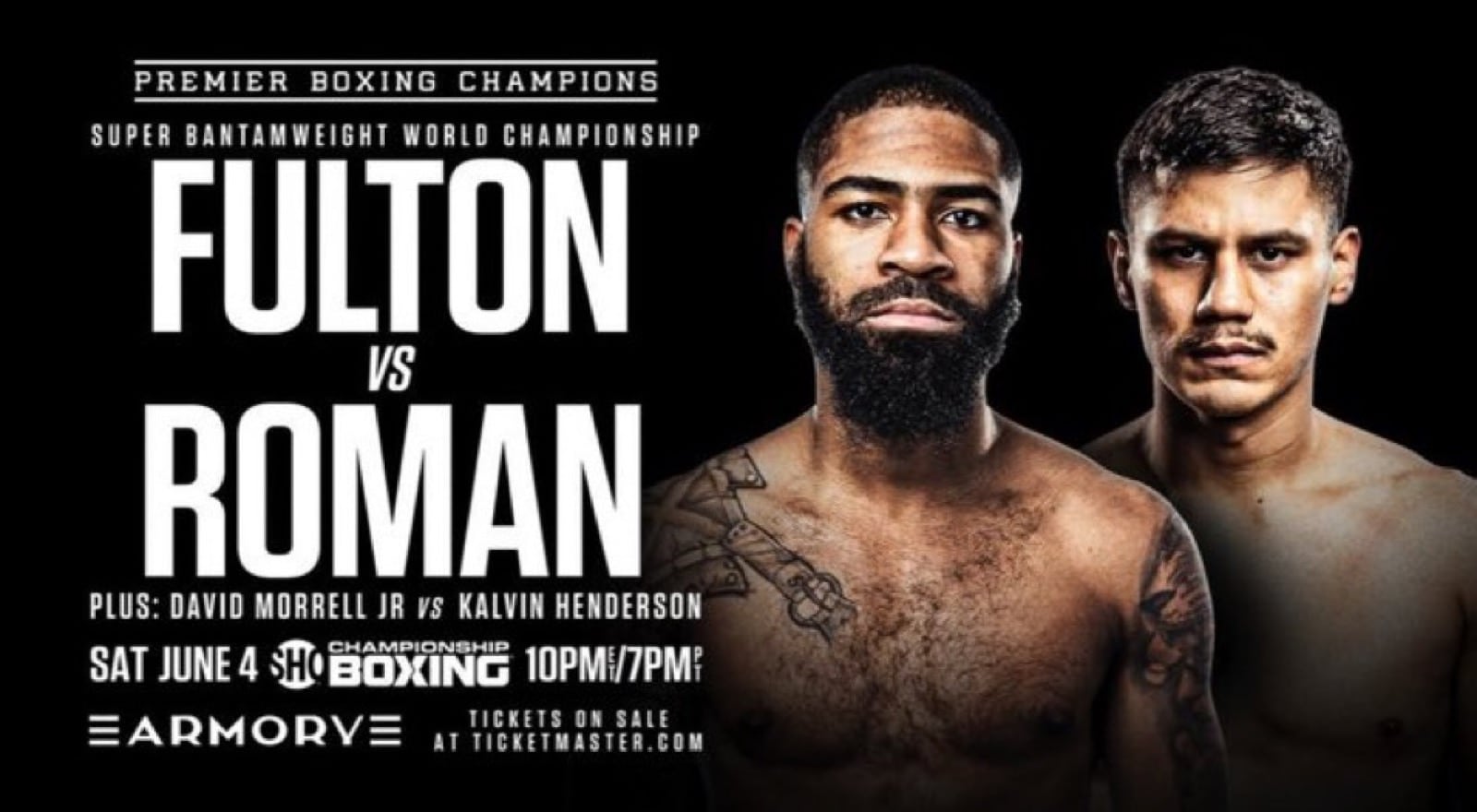 Unified WBO Junior Featherweight World Champion Stephen Fulton Jr. promised victory and former unified champion Danny Roman predicted a Fight of the Year during a virtual press conference on Tuesday to preview their much-anticipated title showdown before headlining action live on SHOWTIME on Saturday, June 4 in a Premier Boxing Champions event from The Armory in Minneapolis.

After unifying titles in a 2021 Fight of the Year against Brandon Figueroa on SHOWTIME last November, Philadelphia’s Fulton returns to action against the exciting Los Angeles-native Roman. The latter seeks to become a unified champion at 122-pounds for the second time in a matchup built to deliver fireworks. Morrell will look to thrill the fans in his adopted hometown in the co-main event and extend his knockout streak to four against Henderson, after 2021, which saw him twice score two KOs at The Armory.

Tickets for the event, which are promoted by TGB Promotions and Warriors Boxing, are on sale now and can be purchased at the Armory at http://ArmoryMN.com/ and through Ticketmaster. The Fulton vs. Roman fight is promoted in association with Thompson Boxing.

Here is what the fighters had to say Tuesday:

“Everything has been great. Camp has been unique and challenging for me, training through Ramadan. Training with little energy during Ramadan helped me make weight. Right now, I’m just looking forward to June 4.

“I’ve fought during Ramadan four years and got knockouts. I already know how to prepare for a fight this way. My mental is different when I’m fasting and on my spiritual journey. Those are the things that push me to the next level mentally. The fight game is more mental than physical anyway.

“Roman was doing a lot of tweeting at me, saying that I was ducking, and I didn’t say anything back and made the fight happen. I was presented with other fighters to face, and I chose Danny Roman. He deserved the opportunity, so I gave it to him. I want them to keep that same energy.

“He’s a great fighter, and you can’t take that away from him. I don’t understand how he didn’t get his rematch for his original belts, but I decided to give him the shot at mine.

“I expect Roman to be different against me than any other fight. He’s looking to get back on top. I have to be intelligent and able to adapt. That’s what I do best.

“I don’t care what anyone on the outside thinks. I know what I am. I’m the unified champ. I only have to prove it to myself. I guess since my last fight, and I’ve changed my mind. I’m not worried about anyone else. I’m taking these fights for myself.

“Fans are going to see a victory. I guarantee success. I can’t say how it will happen because my mood and mind change every day. As of right now, expect to see an intelligent boxer.

“I showed against Brandon Figueroa that I can do whatever it takes to get the job done. I boxed early in my career, and I’ve fought toe-to-toe in recent bouts. I know what I’m capable of and will show you.

“Being in two dog fights back-to-back has only pushed me to an even higher confidence level. I can do what I want in that ring at any time. Whenever I want to.”

“It’s been a great training camp. We’ve been getting ready for the best in the unified champion Stephen Fulton. It’s a fight you have to see. We will have the same energy that I’ve had on social media. You can consider him the best in the division right now. He’s the champion I want right now.

“This is a fight where I can earn a lot of respect. That’s what every fighter wants. Even when I became a unified champion, they still had me below the other patrons. I think that goes for Fulton as well. Everybody is trying to prove themselves as the best in the division. This is the fight. I’m fighting against who is considered the best in the division, and I get a chance to be back on top.

“It’s true that when I was the champion, Fulton was calling me out, and I didn’t give him a chance. He called me out, and I had different plans. I wanted to unify the belts and be undisputed. I’m thankful that he’s given me the chance to fight him now that he’s the champion.

“Fans should expect a great fight and even a Fight of the Year. We always go out there and fight our hearts out. We’ll give the best that we can for the people, and I know Fulton will do the same. He’s the unified champion defending his belts. I want those belts so that it will be a great night.

“My fight against Murodjon Akhmadaliev was close, and I still believe I won. Then I didn’t get the rematch, so now, two-and-a-half years later, I’m getting another chance to get back on top, so I’m more than thankful for that.

“Fulton fought a good fight against Brandon Figueroa. It was a close one, but he took it, so respect to him. He was brilliant and made reasonable adjustments during the battle.

“We’ve been in situations like this before. Important fights. Now, I’m the challenger. I’m challenging Fulton for the two titles, so mentally, I’m ready. I’ve been through this road already, and I know what it takes. I’ve trained hard like I always do. Mentally and physically, I feel prepared.

“This is my chance. It doesn’t come twice, especially against a unified champion. I’m one step away from becoming a unified champion again. This is for everything. Either you do this, or you don’t. I’m more than excited, and I feel more than ready. I hope Fulton feels the same way. Let’s give the people what they want to see. They want to see a great fight, so let’s give it to them.”