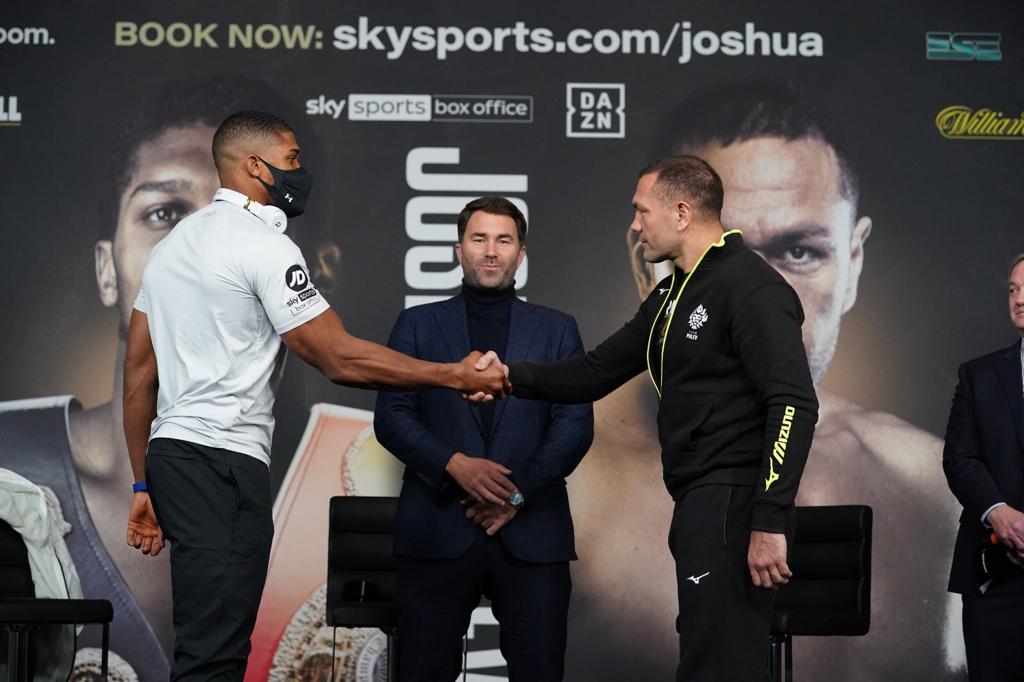 “This is the curtain closer for a difficult 2020, but it doesn’t get any bigger. The unified World Heavyweight Championship between Anthony Joshua and his Mandatory Challenger Kubrat Pulev.”

“Kubrat Pulev is a really rugged fighter. Pulev went into very serious training in Bulgaria, he’s in the best condition of his career. I look for him to not only beat AJ but to knock him out.

“Tyson Fury agrees with me that there’s a great chance that Pulev is going to upset the apple cart and beat Anthony Joshua. That’s why they do the fights, to see what happens in the ring. Without question, whatever way the fight goes it’s going to be very entertaining.”

“We’re finally here, two days away, it’s exciting and we’re really happy to be here. For Kubrat, this fight is about father and country. Kubrat descends from an ancient people the Thracians. Those people prided themselves on the prowess of their warriors, and that’s what Kubrat is – a real warrior.

“Kubrat is here to do what his father dreamt for him. His father wanted two sons that would become boxers and eventually become World Champions.

“He’s in incredible condition, he’s lean and he’s man on a mission. I believe on Saturday the referee will be raising his hand, I believe that Kubrat will knock Anthony Joshua out.”

“The pressure that I went through last year was tough, but it made me mentally stronger. I grew a thicker skin. I’ve always been tough and wanted to fight the best, that’s never been an issue.

“What have I got to lose? I’ve got everything to gain. I want to be successful in boxing and the only way to be successful is take on big challenges. This is just another one I’m looking forward to competing with.

“I want to promote boxing; I don’t yearn for that credit. I’m very motivated, I’m hungry, that’s why I put myself forward for any opportunity. I’ve got a family to feed, friends I want to do business with, the worlds my oyster. At the end of the day, I can’t expect anyone to love me if I don’t love myself, so I respect myself, and that’s why I put in work every single day.

“I’ve been fighting at a top level ever since I walked into the gym. I had a three-year amateur career, going from walking into the gym to competing at the European Championships, World Championships and the Olympics.

“I’ve been punched by the strongest people many times but I’m still here today. That never changed me, just because I took a loss from Ruiz I don’t think that’s enough to change someone. Every fighter trains hard, but it’s character that separates us, and I’ve got a lot of character.

“It’ll be good for the fans, but my focus will be just on Pulev. No disrespect to the fans coming in but I’ve got a serious job I need to complete. God willing I’m confident I’ll enjoy the victory after.

“I’ve known Kubrat Pulev for many years. I was in the training camp when his brother was sparring Warren Baister. I was in Klitschko’s camp when he prepared for Pulev. I understand some of tactics that need to go in to beating him.

“I’m prepared for the fight to go to the final bell, I feel like I’m a 15 round fighter not a 12-round fighter. If it needs to go 12 rounds, I’ll be more than capable to carry my stamina, my boxing IQ, concentration and strength until the final bell.”

“He’s had a great camp, he really enjoys boxing – we’ve been doing more boxing sessions, two a day in some cases so he’s been really enjoying that.

“He’s sparring great, his athleticism is brilliant, and his physical strength is phenomenal. That’s what people don’t realise when they get in the ring with him, how he can move and how strong he is.

“He’s worked long and hard on the discipline, doesn’t underestimate anybody and takes everyone seriously. He’s not unified champion for no reason, he’s a fantastic fighter and he’ll only get better. This is a good fight for him and one we look forward to.

“Anthony fights the very best fighters out there, that’s why he’s achieved what he has achieved and why he’s got the name he’s got – he doesn’t duck anybody. Kubrat Pulev is one of the best out there, he’s a really good fighter, but I believe Anthony’s a better fighter that’s why he’s the champ and we believe he’ll prove that Saturday night.

“I think he’s gone through a learning experience; he’s wasn’t 100% going into the first Ruiz fight. We took the rematch and he won it comfortably, we always thought he would. Ruiz is a very good fighter, a very strong underestimated boxer.

“I’m ready to fight, we waited a long time for this fight. In 2017 I had a problem and that’s why I said to my trainer we must go for the win, not to fight now but fight a couple of years later. I knew the fight would come one day.

“I’m here now, ready to fight and win – I believe Saturday night I will take the win.

“In 2017 I was younger, but I also had a problem with the sparring, and I couldn’t fight. Now I’m healthy, I’m ready and happy the fight – with the pandemic around the world it’s not easy. I’m ready to get the win.

“Of course, he’s ready, this is what he’s trained for his entire life. This is a big opportunity. It’s a trying time in the world right now and he [Kubrat] has a chance to take people’s minds of it and take the victory.

“He can entertain the world so they can see his journey, what he’s done on the road to become Heavyweight Champion of the World. It’s good for Kubrat to help the world on its way to normality. We’re ready.

“Kubrat is mentally strong and I think we’ll cause on upset on Saturday night.

“Of course, you need somebody like Anthony Joshua to make the victory that much sweeter. If I thought Anthony wasn’t the one to bring that diversity, then it wouldn’t be a good fight. I think he’s very well prepared, he’s in his home country, he’s got a lot to prove and he’s going to come out guns blazing.”

“For me, the most important thing is fighting. The Titles will come in due course, I thought it was my time this Saturday, but I’ll just have to keep the training going and beat a good undefeated fighter.

“I feel like if anything this is a positive, I’d won the British Commonwealth European Title and the World Title shot has just come. However, this feels like a final eliminator and it’s added a bit of spice to Saturday for me. He’s got the world at his feet if he manages to win so I’ll have to make sure I go and do my thing.

“This is a great opportunity to put on a mature performance. Shane said he’s not going to happy with me if I don’t do certain things in this fight, so I’m going to make sure they get done.

“It’s one thing doing it in the gym, it’s about executing it on fight day. There are certain things I do in the gym I don’t do in the ring; it’s about translating that. I’m happy to win, but there’s more that I’m capable of doing that I need to bring into the fights if I’m going to be World Champion.”

“I’ve had only five days’ notice, but I’ll give it everything I’ve got.”