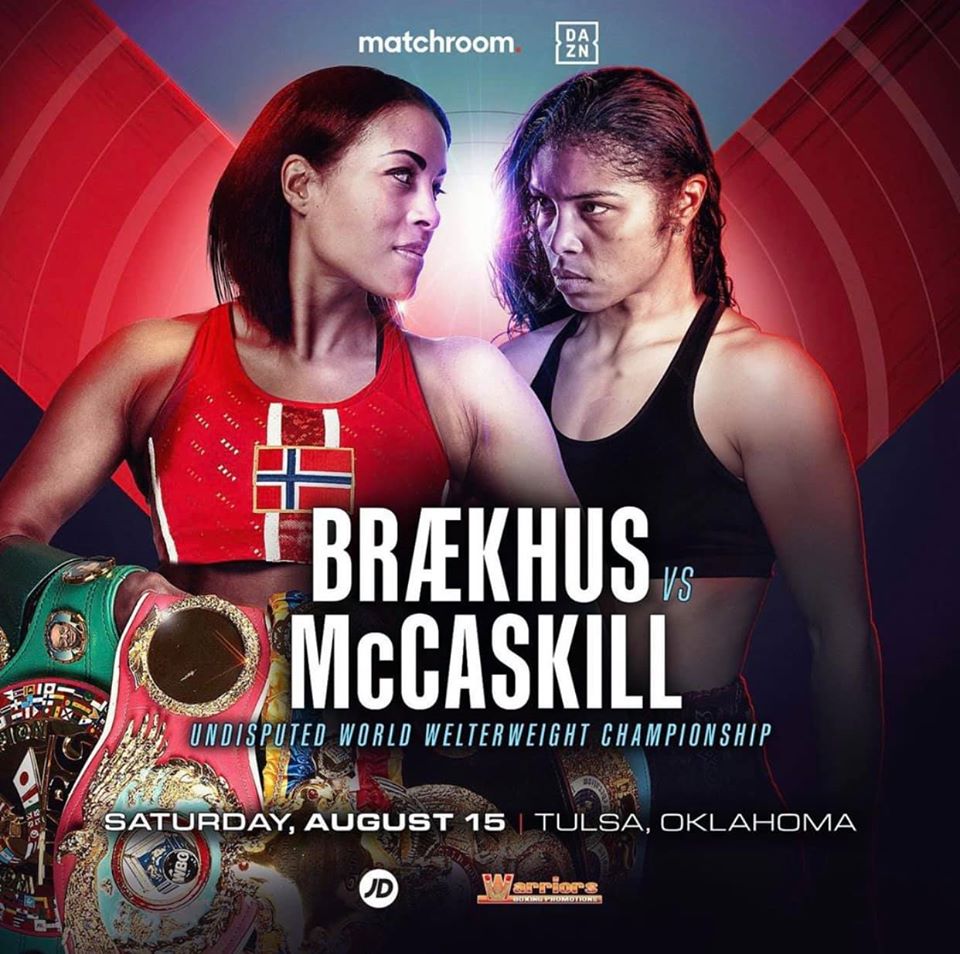 Prior to the lockdown, Cecilia Brækhus was set to defend her Undisputed WBO Welterweight Championship in Maryland against Jessica McCaskill, and now, the fight is returning in Tulsa, Oklahoma on Saturday August 15, exclusively live on DAZN in the US.

Brækhus (36-0 9 KOs) has dominated the Welterweight division for 11 years and victory over McCaskill would see the Norwegian sensation break Joe Louis’ record of 25 consecutive World title defenses, with the 38 year old’s record stretching back to her first World title fight in her 11th pro outing in March 2009.

‘The First Lady’ still holds the same ambitions from when she first became a World ruler, and with a long camp behind her in Big Bear, California with new trainer Abel Sanchez, Brækhus is itching to get back into action and defend her belts in style.

“Finally we have a new fight date and I cannot wait to return to battle,” said Brækhus. “It’s been an extended camp in Big Bear with my new trainer Abel Sanchez and I’m very excited to defend my world titles against Jessica on August 15. I know how tough of a fight this is and will be well prepared for victory.

“Thanks very much to Abel, the Matchroom Boxing Team and Tom Loeffler for all of their support during these unique times. And to my fans in Norway, the United States and all over the world, thanks so much for continuing to inspire me, I hear you loud and clear.”

It’s fitting that McCaskill (8-2 3 KOs) marks the return of Matchroom Boxing USA on DAZN from the lockdown as the Chicago ace won her WBC World Super-Lightweight title in Hearn’s first ever show on the groundbreaking streaming network in America in her hometown in October 2018 against Erica Farias.

‘CasKILLA’ went on to unify the division by taking the WBA crown from Farias fellow Argentine Anahi Sanchez in May 2019 in Maryland before putting both belts on the line in a rematch with Farias in her Windy City home, edging out her old foe via majority decision.

The 35 year old now meets the Norwegian superstar for the undisputed title in just her 11th fight, and McCaskill is determined to keep her fairytale story going and end Braekhus supremacy.

“I’m just looking to make history and shock the world as I usually do every time,” said McCaskill. “I’m expecting to knock out Cecilia. I don’t know what round, but this extra time we’ve got to train before the fight is definitely going to make us a lot sharper and a lot stronger and smarter overall.

“I’ve been in the gym every day for multiple workouts and I can’t wait to show what we’ve been working on.”