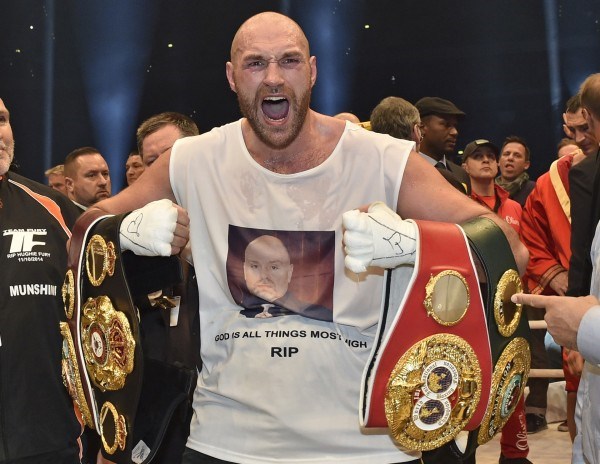 Tyson Fury knew it was his “destiny” to become world heavyweight champion as he dethroned Wladimir Klitschko and ended the Ukrainian’s nine-year reign with a slick points win in Dusseldorf.

The self-styled “Gypsy King” bullishly claimed he expected an easy fight against the WBA, WBO and IBF title holder as he attempted to become Britain’s eighth world heavyweight champion at Dusseldorf’s ESPRIT Arena.

The Mancunian, a 4/1 underdog, baffled Klitschko with a stylish, measured performance in which he utilised his height and youth perfectly to earn a superb win with scores of 115-112 twice and 116-111 despite being deducted a point for fouling.

Fury, who was respectful to Klitschko during fight week and magnanimous in victory, said: “I’ve always known I would become world heavyweight champion. It’s my destiny.

“Ask any member of my family – we’ve always known. My brother Shane and I used to spar with each other in the kitchen. We didn’t have gloves, so we wrapped tea towels around our hands. “I knew I would do it and I knew I would beat Wladimir tonight. I’ve always been confident and I showed why in this fight. I think he knew too.”

He added: “I’m grateful to him for giving me this chance and if I can be half the champion he is, I’ll be a happy man.”

Fury’s hopes of victory pinned largely on his height – three inches taller than Klitschko at 6ft 9ins – and his age, at 27 being 12 years younger than the champion.

The unbeaten Traveller (24-0, 18KOs) had even claimed the bout against the hugely experienced Klitschko (64-3, 53KOs) would be “an easy fight”, but he obviously started a heavy underdog. Fury ran across the ring towards Klitschko at the first bell, a bundle of nervous energy.

It was a chess match rather than a brawl but Fury looked confident and composed throughout, switching stances regularly and using footwork, feints and head movement to keep Klitschko frustrated.

Klitschko, used to fighting shorter opponents who he can keep at arm’s length, was looking every one of his 39 years as his ponderous, orthodox style threatened to lose him the fight.

As dull as the action was, Fury was boxing beautifully and seemed to be having the time of his life.

Klitschko finally opened up with the right hand in the ninth, landing it properly twice. Fury dealt with it well, however, landing a big left hook in return.

The Ukrainian landed a thudding one-two in the 11th as opinion among observers differed as to whom was winning.

Fury began the 12th aggressively and a left hook hurt Klitschko and chants of “Fury, Fury” rang out. Klitschko landed a ferocious right hand again but Fury shook it off well as the fight finally caught fire. Fury was hurt by another, however, but held on for the final bell.

Both men claimed victory but when the scores were announced, it was Fury whose hand was raised to signal a changing of the guard in the heavyweight division. “It wasn’t my night,” Klitschko admitted. “I wish I’d been able to land more clean shots but I couldn’t get the distance right.

“Tyson was quick, with his head movement. I congratulate him. He won the fight.

Fury said: “I found him quite difficult to hit, as he did with me.

“He caught me with some good shots. I’m a big, young, fast heavyweight and he landed some hard punches.