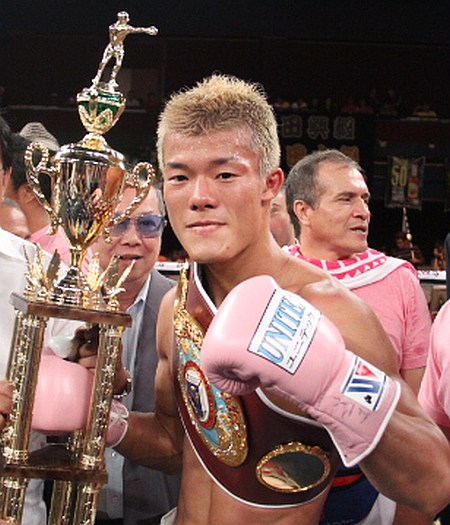 The Kameda family is now forever etched into the history books.

Tomoki Kameda bested Paulus Ambunda by unanimous decision to win a bantamweight belt Thursday evening in Cebu, Philippines. The feat makes the Kameda brothers the first trio in boxing history to have all won a major title.

Kameda literally had his family in corner for the anticipated historic moment. His father served as chief second, while older brothers Koki (presently a bantamweight titlist) and Daiki (former 115 lb. beltholder in pursuit of a second title reign) served as corner assistants. All sported pink t-shirts with “3” on the front and references to Guinness Book of World Records on the back.

The 22-year old certainly did his part to ensure the family’s place in boxing history, utilizing his three-inch height advantage as he boxed beautifully in the early rounds. Ambunda, an unbeaten titlist from Namibia, tried his hardest to leave as champion, but simply couldn’t work his way inside. Worse, his leaky defense made for an inviting body attack on the occasions when Kameda chose to stand and trade.

Ambunda punched his way into the fight in round five, the first round he won outright on all three scorecards. Kameda spent most of the round avoiding the incoming, tactics which would lose him rounds even in his native Japan – where such movement is regarded by the nation’s officials as “giving your ground.”

Any chance of momentum swaying in favor of the defending titlist came to a screeching halt one round later. Kameda was back in control by round six, alternating between lateral movement and banging Ambunda’s body like a drum. Ambunda hit the deck towards rounds end, but the sequence was correctly ruled a slip.

The second half of the fight was similar to the preceding rounds. Kameda remained in control for as long as he wanted, building up a massive enough lead to where he could afford to take a break whenever he felt the need.

With three minutes to go, though, the adrenaline began to flow as he saw history well within his reach. Kameda emphatically sealed the round, complete with a last second knockdown which either went undetected or virtually ignored by the referee as the fight came to a close.

The reading of the scorecards was a mere formality, other than to cement Kameda’s place in boxing history for his nation and for his family on a much larger scale. The youngest of the fighting brother trio was understandably emotional once officially announced as winner and new bantamweight titlist.

“This is a dream come true, for myself and my father. All brothers have now become champions,” said a tearful Tomoki before turning to his family for his final shout out. “Thank you for aiding me.”

Kameda’s win marks just the second time in boxing history where brothers simultaneously reign as titlists in the same weight class. Both moments are currently in the present – Tomoki and Koki both serve as bantamweight titlists, while Wladimir and Vitali Klitschko are in possession of all of the alphabet hardware.

The Kameda family could have company on its tail. The thought of three brothers winning titles – even in an era of splintered championships – is a rare feat, but the Morales brothers are within reach of the same goal. Ivan Morales is a rising super flyweight contender; a future title win would join Diego and his far more famous older brother Erik Morales as family members who have claimed champion status.

Still, there is more history to be made for the Kamedas. Middle brother Daiki, previously a super flyweight titlist, is a month – and a win – away from a potential second title reign, as he faces Rodrigo Guerrero for a vacant belt in September.

A win by Daiki would mark a feat that will most likely never be matched, as all three brothers would simultaneously serve as active title holders.

Nothing is forever – there will be future fighters from Japan to win WBO belts. As mentioned, the Morales family could become the next trio of brothers to claim championship status. There could even be another set of three brothers to win belts at the same time.

But the thing about history is that there can only be one first for each category. Tomoki Kameda’s efforts Thursday evening in the Philippines secured that right for his family.