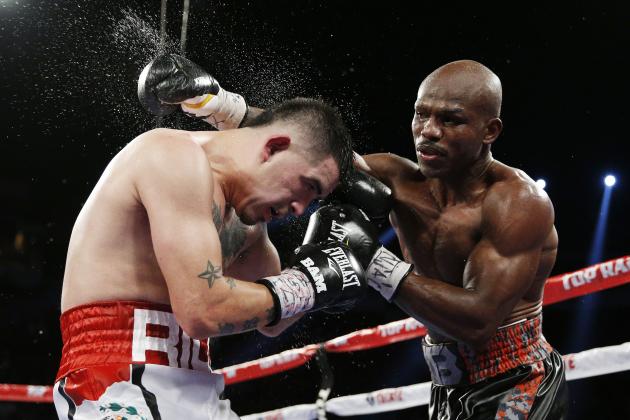 On Saturday night in Las Vegas, that’s what Bradley did, scoring a ninth-round technical knockout over Rios in spectacular fashion. Per the HBO broadcast, Bradley outlanded Rios 254-81 in the fight.

Under the tutelage of new trainer Teddy Atlas, Bradley employed more movement than has customarily been part of his repertoire. The new wrinkles worked, as Bradley was smarter and at his best from a technical standpoint.

Rios appeared to win just one round before a left hook to the body in the ninth put him down on both knees. A right uppercut grazed Rios before he went down, but the body shot did the damage. Rios would get to his feet, but a moderate flurry to his body moments later brought on an end to the fight.

Body shots were a key part of Bradley’s attack all night, as he looked to have hurt Rios on several occasions with blows to the midsection. As good as Bradley looked all night, Rios looked like a shell of the fighter who once held a title at 140 pounds. Michael Woods of the Sweet Science had a good assessment of the bout:

Rios made weight Friday but ballooned up to 170 pounds on the day of the fight, per the HBO broadcast. The extra weight didn’t help him, as he was even slower than usual.

When the fight was over, the 29-year-old Rios was emotional, announcing this was his last time in the ring. HBO Boxing shared Rios’ quote:

“My body isn’t the same anymore. I’ve been in a lot of wars. It might be time to hang it up.” – @Brandon_Rios1#BradleyRios Rios’ retirement seems to make sense despite his relatively young age. He has seen his best days in the ring, and there’s nothing left for him to do but take more punishment for lower paydays than he’s become accustomed to.

If he has the financial means, retirement is the smartest move he can make at this point in his career.

Sports Illustrated’s Chris Mannix heard the announcement, but he wasn’t buying it:  Brandon Rios says he will retire after the loss to Tim Bradley. Don’t count on it. Fighters like that, they often come back.

Only time will tell whether Rios’ retirement sticks. As for Bradley, there’s new life to his career. With Atlas in his corner, it seems as though Bradley will, at the least, have the best game plan in place for each of his fights.

The corner advice was poignant and entertaining. Check out this excerpt from Atlas’ pep talk before the seventh round, per HBO Boxing:  “The fire is coming. Are you ready for the fire?” – Teddy Atlas speaking to @timbradleyjr #BradleyRios

It was chilling stuff, and it reached Bradley. That’s something that former trainer Joel Diaz wasn’t always able to do. Bradley’s career has been littered with ill-advised slugging and careless defense late in fights. He had no such lapses in concentration against Rios.

Prior to this bout, most fans would have had no interest in seeing Bradley face Manny Pacquiao for a third time. Not everyone would be on board for a trilogy yet, but one more impressive performance would probably get people excited to see Desert Storm battle Pac-Man again.

If not Pacquiao, then perhaps a date with current WBO junior welterweight champion Terence Crawford is in order. Either bout would be intriguing, as the boxing world should be eager to see what else the new and improved Bradley can accomplish.