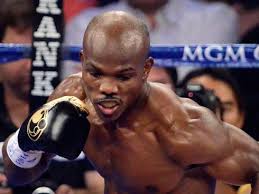 Tim Bradley Focused To Give Marquez His Final Defeat Undefeated WBO welterweight champion Tim Bradley (30-0, 12 KO’s) said the fight with Juan Manuel Marquez (55-6-1, 40 KO’s) is happening at the right time. Bradley wants to give the Mexican veteran his final defeat as a pro. Marquez, 40-years-old, came close to retiring for good after knocking out Manny Pacquiao in the sixth round of their fourth battle last December in Las Vegas. Bradley won a controversial twelve round decision over Pacquiao last June. He wanted to get Marquez in the ring before the Mexican star walked away from the sport.

“I want to be the last one to beat him. Physically I’m fine, I feel ready. The reason I wanted to fight him is because his family did not want him to fight anymore, they wanted him to retire. I said I’d rather face him [now] before [he retires]. I trained for twelve rounds. I don’t have a lot of knockouts but if it happens it would be great. If it don’t happen, then I’ll win by decision. I want to have all the credit for defeating a legend like Marquez. I’m going to be the new face of boxing on October 12,” said Bradley.

“I think Marquez is hungry and determined. He’s been doing this for a long time. He wants my title but my job is to keep it.”