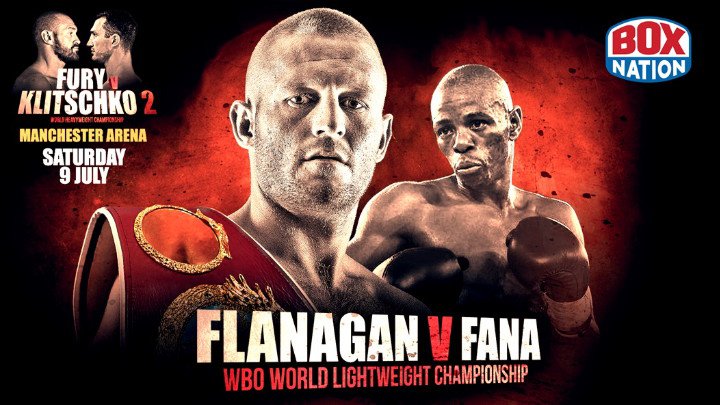 In a very disappointing bit of news, WBO lightweight champion Terry Flanagan (30-0, 12, KOs) will be defending his title next month against 42-year-old former two-time IBF lightweight champion Mzonke Fana (38-9, 16 KOs) in the co-feature bout on the July 9 Tyson Fury vs. Wladimir Klitschko card at the Manchester Arena in Manchester, UK. While the Flanagan-Fana fight announcement has been mostly been greeted by positive reactions, I don’t see it as a good fight. Fana, #12 WBO, is no longer a major player in the lightweight division, and he’s been getting regularly as of late.

A fight between Flanagan and Fana would have made sense eight years ago when Fana was still in his prime, but the guy is no longer a top level fighter. Fana is heading towards journeyman with the way he’s getting beaten.

It’s not just the fact that Fana is getting beaten. It’s the guys that he’s losing to. Fana is getting beaten by 2nd tier guys now at this point in his career and losing over and over again. I honestly don’t know how or why the World Boxing Organization has Fana ranked #12, when he was beaten two times in 2015 by non-top 15 ranked fighters. In other words, Fana was beaten by 2nd tier fighters twice last year in defeats to Hedi Slimani and Xolisani Ndongeni. Fana was also beaten by Edis Tatli in 2013.

“Fana is a two time world champion at super-featherweight, he’s highly experienced, tough and has a very good jab. He will be coming over here looking to take my title but it’s not going to happen,” said Flaangan.

Flanagan says Fana won’t get his WBO title. You think. What a mismatch. I don’t even know why Flanagan is bothering to make a comment on the outcome of this fight, because it’s painfully obvious that he’s going to win. When you get an old timer as your opponent with two recent losses to fodder opposition, then yeah, I think you’re going to win. But why in the heck if Flanagan fighting a near bottom ranked guy like Fana rather than someone ranked higher and doing better in their careers? I’m just saying.

Flanagan needs to step it up a level and face the cream of the lightweight crop rather than facing guys that left their best years behind them eight years ago. I mean, I’m for champions fighting voluntary defenses from time to time, but at least they should face guys that are actually winning and doing well rather than fighters that have taken two recent losses to 2nd tier opposition like Fana.

I think Flanagan is a good fighter, but he’s capable of beating better contenders than 42-year-old Fana. That’s just soft match-making if you ask me. They might as well have selected Fana’s opponent from the retirement ranks because selecting an older fighter that is getting beaten repeatedly by 2nd tier fighters the way Fana is just isn’t sporting in my view. I do not understand that kind of match-making.

Instead of Flanagan being matched against the struggling Fana, why wasn’t he put in with #1 WBO, Jose Zepeda, #2 WBO Felix Verdejo, #3 WBO Michael Perez, #4 WBO Jose Felix Jr., #5 WBO Daud Yordan, #6 Sharif Bogere, #7 Saul Rodriguez, #8 Petr Petrov, #9 Liam Walsh, #10 Juan Martin Elorde or #11 Fernando David Saucedo? At least those guys would have made a fight out of it. I think Flanagan would lose to Verdejo, which I guess is why we’re not seeing him get the fight.