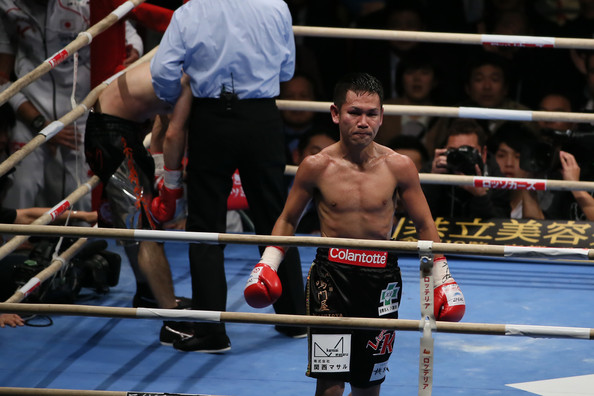 Takayama claims little piece of history as he stops Odaira in 7! For the second day running we saw a small slice of history being created. Yesterday we saw Naoya Inoue becoming the quickest man to become a 2-weight world champion, setting a world record in his 8th fight when he stopped Omar Andres Narvaez in 2 rounds. Today the history was merely a bit of national history for Japanese fighters as Katsunari Takayama (28-7-0-1, 11) became the first ever Japanese fighter to win a version of all 4 major world titles.

Takayama did that earlier today by stopping light hitting compatriot Go Odaira (11-4-3, 1) in the 7th round of their meeting and claimed the IBF Minimumweight title, for a second time, as well as the elusive WBO Minimumweight crown, the one title he had never had in his illustrious career. On paper the bout promised excitement. Both men are volume punchers usually, both like to let their hands go and both are as reliant on their speed and movement as any other tool in their arsenal. As well as that there had been only a single stoppage defeat between the two men, and that was a more than 11 years ago when an immature Takayama was caught in the 9th round against Masato Hatakeyama in what was Takayama’s first title bout. It seemed to go 12 on paper, but of course fights aren’t fought on paper and when history is there for the taking sometimes a fighter can find something else in themselves.

The fight started well with both managing to find their range and timing, neither showed great fear of the other’s power but neither felt like taking too many risks. It was busy without being brutal, fast without being rushed and in fact Odaira managed to more than hold his own early on with round 4 being a particularly good one for the relatively unknown fighter. Unfortunately as we hit the middle of the bout things began to change and Takayama’s shots began to take their toll with Odaira being forced to take body shots, the like of which he had never tasted.

The body shots began to slow Odaira in round 5 and, as we all know, when a fighter is feeling the effects of body shots they can slow quickly and in round 6 it all seemed to unravel for Odaira who suddenly looked like a tiring man, despite still managing to do enough to fight back. Unfortunately for the Hanagata promoted fighter this was the beginning of the end and in round 7 Takayama got his chance and took it, with the finish coming in the a typical Takayama fashion with the “Lightning Kid” unloading shot after shot after shot in a furious bombardment of leather. The shots themselves had a lack of pop but the sheer volume of them was insane and Odaira’s exhaustion was showing as the referee was forced to save Odaira who was being swallowed whole by a whirlwind of punches.

Whilst the win for Takayama was historic it also sees him achieving one of his two public aims. It seems him claiming all 4 titles in a career grandslam, the other aim he has spoken about is to become a multi-weight world champion and a move to 108lbs seems likely. Hopefully however he will look to defend his unified crown, possibly against talented teenage sensation Kosei Tanaka who is himself chasing Japanese boxing history as he chases the quickest rise to a world title.