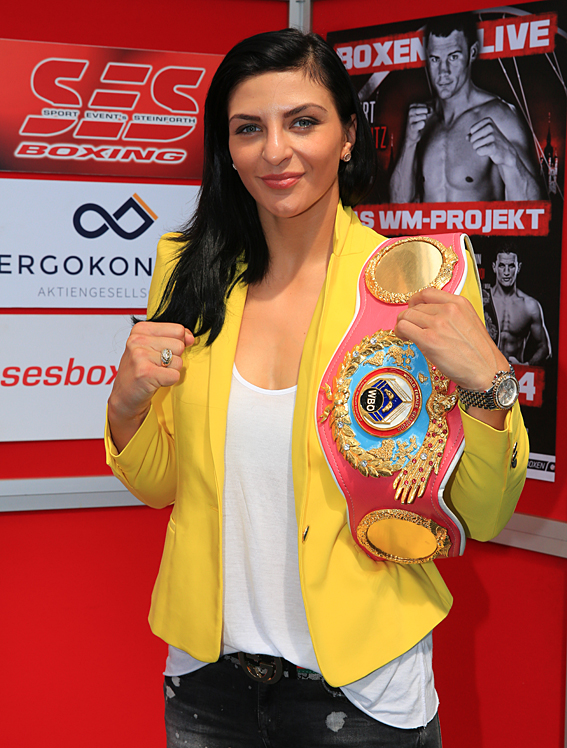 The women’s middleweight world championship between unified WBC and WBO titlist Christina Hammer and former world champion Tori Nelson has been added to the June 22 SHOWTIME telecast from Masonic Temple in Detroit.

With the addition of Hammer vs. Nelson to the June 22 Showtime Boxing: Special Edition (10 p.m. ET/PT) telecast, all four women’s middleweight world titles will be at stake in separate bouts featuring two of the consensus top 10 pound-for-pound women in the world.

The winners of Shields vs. Gabriels and Hammer vs. Nelson will meet this fall on SHOWTIME to determine the undisputed women’s middleweight world champion.

Hammer (22-0, 10 KOs), of Dortmund, Germany, has dominated the women’s middleweight division for nearly eight years, losing just a handful of rounds in her reign as champion at 160 pounds. The 27-year-old, who will make her U.S. debut on June 22, won the WBO title in 2010 then became unified champion in 2016 with a win over defending WBC champion Kali Reis.

Nelson (17-1-3, 2 KOs) won a middleweight world championship in 2011 and owns wins over previously unbeaten Alicia Napoleon, Mia St. John, and Reis, who recently floored women’s welterweight champion Cecilia Braekhus. The native of Ashburn, Va., suffered her first loss in a spirited decision to Shields this January on SHOWTIME in what was the toughest test of Shields’ young career.

“Now that I’m added to the TV portion of the card it gives me even more motivation to prove to the U.S. audience that I’m the best female fighter in the world,” Hammer said. “My plan is to do something that Claressa Shields couldn’t do – knock out Tori Nelson. Once I take care of business with Nelson, my goal is to fight the winner of Shields vs. Gabriels to become the undisputed women’s middleweight world champion.”

“Christina Hammer can’t bring anything I haven’t seen before,” Nelson said. “I’ve beaten Kali Reis, Mia St. John, Alicia Napoleon. I went the distance with Claressa Shields and I plan on beating Hammer on June 22 to earn my shot at revenge against Shields. This is my chance and I don’t plan to let it slip away.”

“Adding Hammer vs. Nelson to the card was the right move as we collectively work to elevate the status of women’s boxing at the highest level,” said Gordon Hall, Executive Producer of SHOWTIME BOXING: SPECIAL EDITION. “The June 22 telecast now features two of the best pound-for-pound female fighters – Claressa Shields and Christina Hammer – in what will be our eighth presentation of women’s boxing since 2016. All four of the world titles in the women’s middleweight division are at stake on June 22 with the goal of the winners meeting this fall to determine an undisputed middleweight champion.”

“I am honored to promote this historic night of boxing on SHOWTIME in the championship city of Detroit,” said promoter Dmitriy Salita. “I believe these fights are in line with the best and most competitive matchups in the history of women’s boxing. All four of these fighters are coming from different parts of the globe to win a world title and show they are the best. It will be an exciting and explosive night of boxing from beginning to end for the fans attending the fight at the Detroit Masonic Temple and for those watching the fight live on SHOWTIME.”