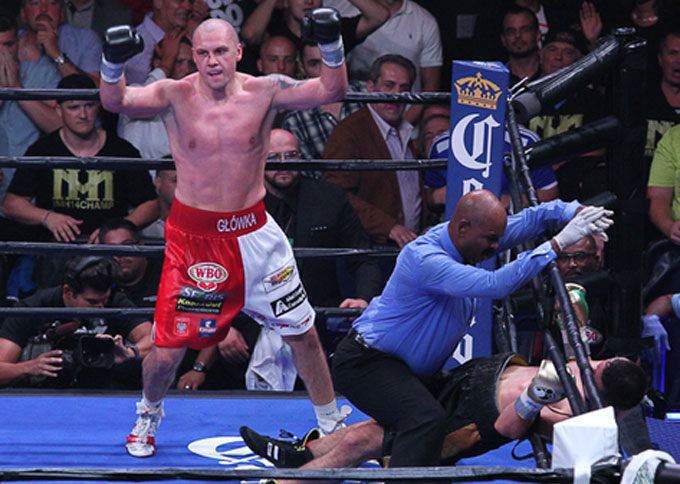 It took eight and a half months but boxing fans finally have a clear fight of the year.

And it was in the cruiserweight division.

In a dramatic and violent fight in which both fighters hit the canvas, Poland’s Krzysztof Glowacki upset long-reigning WBO cruiserweight champion Marco Huck by knocking him out in the eleventh round at the Prudential Center in Newark, New Jersey.

The fight was the co-featured bout to the Antonio Tarver-Steve Cunningham main event on the “Premier Boxing Champions” card on Spike on Friday night.

Huck (38-3-1, 26 KO’s) was attempting to break the record for the most consecutive cruiserweight title defenses in boxing history (14) but his opponent wasn’t so agreeable. Glowacki (25-0, 16 KO’s), fighting in front of a passionate, pro-Polish crowd, hurt Huck in the first and knocked him down once in the eleventh before stopping him along the ropes in the same round. It was the fight in between Glowacki’s early and late success, however, which showed both men’s heart and courage. Glowacki was almost knocked out himself in the sixth after getting drilled with a hard left hook that left him staring up from the canvas.

It was that type of fight.

“The U.S. market is now open to me,” Glowacki said in the ring after the fight ended. “Fans around the world will now have to respect the cruiserweight division.”

If there are more fights like his one against Huck, that probably won’t be an issue.

Glowacki began the fight aggressively. He slammed Huck into the ropes with a left and in the final ten seconds of the round he rocked him in the corner with a hard right that made Huck’s legs jiggle. Glowacki continued to march forward in the second as he banged Huck to the body and head but Huck appeared to settle down on his punches in the final minute. Both men fought after the bell in the third and fourth but Huck did better in the latter after connecting with clean, flush shots.

Both men exchanged big punches in the fifth as Huck began to pick up the pace as much as Glowacki dropped it. A wide left hook then dropped Glowacki on his back in the sixth. The fight appeared to be over as the Polish fighter lay on the canvas with his hands above his head but he unsteadily rose and the action was allowed to continue.

“I didn’t know where I was,” Glowacki would state later on.

Surprisingly, Glowacki fought back well and held his own against Huck in what turned into an all-action round. Huck and Glowacki took a breather in the first half of the seventh but then Glowacki connected with a right that drove Huck back into the ropes. Glowacki flinched coming out of a combination in the eighth and Huck jumped on him and hurt him with shots of his own. Huck also connected well with combinations in the tenth as Glowacki seemed to tire.

In the eleventh, however, Glowacki awoke again. Huck attempted to land a lazy combination and soon paid the price after Glowacki connected with a left and wide right. The shots dropped Huck violently to the floor. Huck rose on clearly shaky legs and Glowacki quickly resumed battering his opponent. Huck couldn’t adequately defend himself but attempted to move out of the way anyway. Glowacki stayed on top of him, however, and connected with left hooks that snapped Huck’s head back along the ropes. As Huck continued to absorb punishment his body crumbled into the middle ropes, prompting referee David Fields to make a correct stoppage at the 2:39 mark of the round.

“When there was one minute left in the eleventh I knew I had to come on strong,” said Glowacki. “I always had a thing against bullies. Huck was trying to bully me in the ring and I brought it to him. This is the biggest night of my life.”