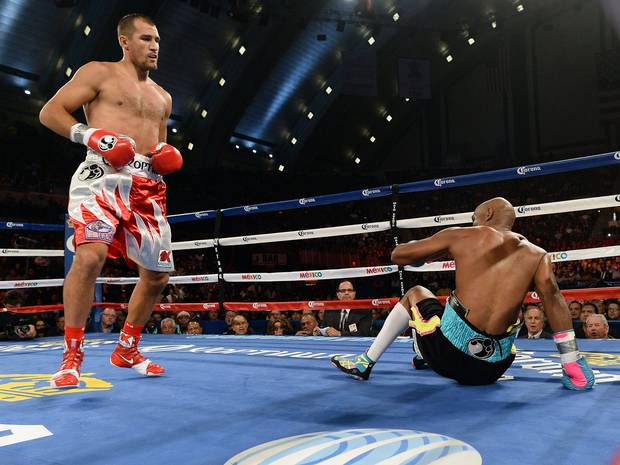 Russia’s Sergey Kovalev is one of the most powerful boxers in the world, and the 26-0-1 superstar defends his WBA Super, IBF and WBO light heavyweight titles on Saturday night against Canada’s 29-2-1 Jean Pascal.

Kovalev last fought back in November as he dismantled Bernard Hopkins over 12 rounds, and despite knocking Hopkins down in round one, this was Kovalev’s first decision victory since 2010 and his performance over the longer distance was very impressive.

32-year-old Jean Pascal built his career at Super middleweight, before moving up to Light heavyweight in impressive fashion. Across a ten year career he has lost just twice, to Carl Froch in 2008 and Bernard Hopkins in 2011, while he is undefeated in his last four fights.

The bookmakers see Kovalev as a wide favourite at 2/11 with Pascal available at 5/1. Although the Russian is incredibly powerful, he was dropped by the unheralded Blake Caparello last year, though those hoping to wage money on a Pascal stoppage at 10/1 should perhaps hold off, as Pascal has only finished one opponent since 2009.

A longstanding issue with Pascal has been his stamina, which against a fighter of Kovalev’s marauding ability could be a recipe for disaster.

Pascal will need to start fast to prevent the Russian from establishing a rhythm, but by doing that he will expend energy at a far quicker rate.

The Canadian does have home advantage in Montreal, but Kovalev proved in his victory over Nathan Cleverly in Wales that a rabid away fanbase does not bother him in the slightest.

This will be an entertaining clash for as long as it lasts for, and is a genuine world class title match.

Chief support on the undercard is a Heavyweight clash between 28-6 former Cruiserweight world champion Steve Cunningham and Vyacheslav Glazkov.

Since losing to Tyson Fury in April 2013, Cunningham has picked up three successive wins over respectable opposition, while Ukrainian Glazkov is undefeated across his 20 fight career.

Elsewhere, a Light heavyweight clash between 17-0 Vasily Lepikhin and Isaac Chilemba will be a tactical affair and could set up a potential match with the winner of Kovalev and Pascal.

29-3 Andre Berto has lost three of his last five fights, and the former WBC champion is in danger of wasting his excellent talent.

His opponent, the 33-6 Josesito Lopez has won his last three matches, but has failed to reach the heights many expected after he defeated Mike Dallas Jr and Victor Ortiz a couple of years ago.

With the need for exciting fights to entertain TV bosses, and the slightly weak chins of both fighters, expect a stoppage in the middle rounds.

Elsewhere on the card in California, Shawn Porter returns for the first time since losing his world title to Kell Brook against late replacement Erick Bone, while Heavyweights Chris Arreola and Gerald Washington compete in separate matches, where a win for both could set up a future match between the two.

There are seven British cards on Saturday night, including an event from Goodwin Promotions which airs on Matchroom’s Fight Pass platform and features Lee Markham vs Jahmaine Smyle for the English super middleweight title, Larry Ekundayo vs Dale Evans in a British welterweight eliminator, plus outings for the likes of Johnny Garton, Leon McKenzie and Ashley Sexton.