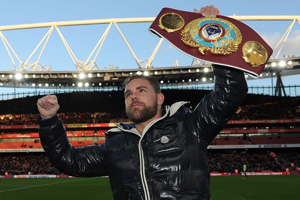 “The next time I’m here I either want to be playing as Arsenal’s new signing or a more realistic option is to fight Golovkin or Eubank,” said Saunders. “Golovkin would be an tremendous fight for British boxing. Muhammad Ali fought Henry Cooper at Highbury so in this new millennium what better than a super-unification fight between me and Golovkin? I know he was at West Ham the other week, but the Emirates is the place it has to be at. As for Eubank Jr, he’s already had his backside kicked by me. What better than me kicking it again in front of 60,000 at Arsenal?”