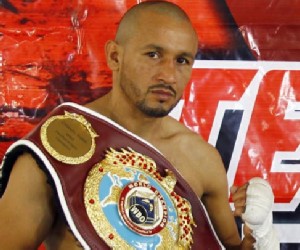 Salido is Going To Impose His Will on Lomachenko Lomachenko, one of the best amateur fighters of all-time, made his pro debut last month of the Marquez-Bradley undercard and easily dispatched experienced contender Jose Ramirez. On the same card, Salido knocked out Orlando Cruz to recapture the WBO crown.

Salido-Lomachenko will be the HBO televised co-feature to the rematch between Julio Cesar Chavez Jr. and Bryan Vera.

“There is already an agreement, almost everything is ready. During the show in China, Bob Arum and Fernando Beltran and Sean Gibbons discussed [the fight] and reached an agreement. I think [Lomachenko] already realized that being a professional is not the same as being in the amateurs. The dressing [on the hand] is different and he hurt his hand [against Ramirez]. I’m very hungry, I need to win [so I can move up and] get a title at super featherweight. He fought with someone who was smaller than him. I am strong, I have the heart of a lion. Anything can be said, but on that day he will encounter a rock,” said Salido.