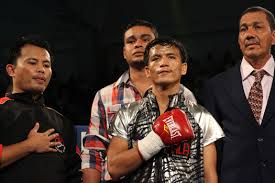 Aldeguer told BoxingScene.com/Manila Standard he is “really working on putting up something really big in Dubai” and is considering a mandatory title defense of WBO minimumweight champion Merlito “Tiger” Sabillo against Nicaragua’s Nicaragua’s undefeated Carlos Buitrago.

The 21 year old Buitrago has an impressive record, being unbeaten in 27 fights with 16 knockouts. He won the Interim title with a twelve round unanimous decision over Julian Yedres who was also undefeated at that time with a record of 21-0 with 13 knockouts, on July 20 this year.

He had earlier scored a 6th round TKO over Colombia’s Jorlie Estrada who was knocked out in the 9th round by Sabillo at the plush Solaire Resort and Casino overlooking Manila Bay last July 13.

Buitrago had also beaten Eddy Castro of Nicaragua  by a  2nd round TKO on May 6, 2011 and followed with a 5th round TKO exactly one year later. Castro is the same fighter who was knocked out in the second round by then minimum  weight champion Donnie Nietes in a title defense on August 30, 2008.

Sabillo who is a devastating puncher and an aggressive fighter has a record of  23-0 with 12 knockouts and was a former street fighter in Bacolod who moved to the famed ALA Gym at the age of 25. He is now 29.

Aldeguer said “we can’t prolong the wait for Nietes and we will discuss with ABS-CBN’s Peter Musngi the chances of staging a world title double-header and indicated there  is “a strong possibility” it would  happen.

Aldeguer said he was informed recently in Macau by Zanfer Promotions that mandatory challenger Moises Fuentes suffered a cut in his last fight when he scored a ten round unanimous decision over Gerardo Verde in Tijuana on June 28 and that since they can’t wait  until next year, Nietes who retained his title with a close majority draw when he first faced Fuentes last March 2, they  may have a voluntary defense before a Fuentes rematch.

He said that next year the plan is to set-up operations in San Diego, California and will study the chance to put on the Nietes title defense against Fuentes in the United States.