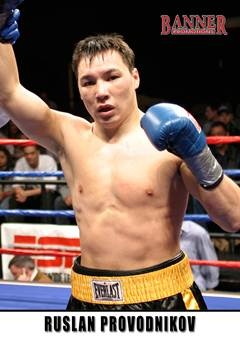 There have been rumblings of a possible matchup for Provodnikov, 22-1 with fifteen knockouts of facing Bradley and he and his team feel the time is now for the potential big fight.

The native of Beryozovo, Russia is one of the most exciting fighters in the world and he feels that not only is he ready but will bring the best out of Bradley.

“I am ready for this type of fight”, said Provodnikov

“I would be grateful for the opportunity and I have trained my whole life for this. Bradley is a great fighter but not only do I know I can win but I will bring the best out of him and our fight will be one to remember”

“We feel that Ruslan is ready for this fight and he will beat Bradley.”, said Provodnikov’s promoter Artie Pelullo of Banner Promotions.

“Based on all the feedback we get after Ruslan’s fights, he is one of if not the most television friendly fighter out there and a fight with Bradley would be a great fight for the fans”

Provodnikov has won five straight bouts which includes his last outing when he stopped Jose Reynoso (16-3-1) on June 29th.