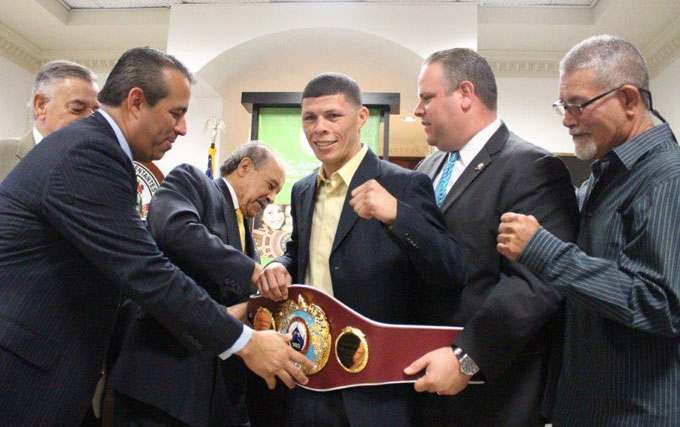 Martinez (29-2-2, 17 KOs) received his new title from the WBO president, Francisco “Paco” Valcarcel in an activity that took place at the Capitol of Puerto Rico through the Representative Angel “Gary” Rodriguez.

“I am very grateful with PR Best Boxing Promotions and the WBO for this opportunity. I did the work and I won the title for the third time,” Martinez said. ” Thanks also to the Representative (Rodríguez) for this recognition here in the House of Representatives.”

Martínez became 130-pound WBO monarch for the time after he won an unanimous decision over Salido (42-13-2, 29 KOs) in an exciting bout last April 11. The boxer was previously crowned as WBO junior lightweight champion when he beat British Nicky Cook by TKO on March 14, 2009, and then on September 15, 2012, by winning a split decision over Miguel Beltran Jr.
Also in the activity were Martinez’s family, his trainer Raul Torres, Peter and Ivan Rivera of PR Best Boxing Promotions (PRBBP), and from the WBO, Adolfo Flores Monge and Jose Izquierdo.