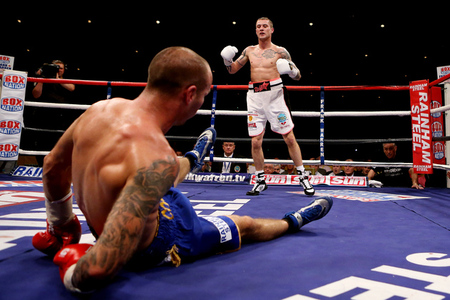 This is going to be hometown advantage for the 29-year-old Burns, although Mitchell fans swear up and down that Mitchell will get a fair shake when it comes to the judging in the fight.

Whatever. I’m not so worried about the judging for the fight. What I’m worried about is the referee keeping control of the action to make sure that Burns doesn’t end up clinching Mitchell into submission. The last couple of fights I’ve seen of Burns have been god awful filled with clinching and dull action. Boring stuff.

Burns’ last fight against Paulus Moses last March was one in which I thought Burns should have been penalized and/or disqualified for all the clinching he did in that fight. What I didn’t understand was why on earth did Burns waste time clinching this guy? It’s not as if Moses had huge knockout power or anything. As far as I can tell the only dangerous thing about Moses was his nice jab. That’s about it. Why clinch a guy repeatedly when the don’t have much power?

Mitchell hasn’t been looking all that great lately. He looked decent in taking out John Murray last year in July in stopping him in the 8th, but then he looked terrible against Felix Lora last February in beating him by a 10 round decision. Lora was landing his pot shots all night long, and Mitchell looked pretty helpless.

So as far as this Saturday night goes, I think Mitchell needs to have his inside fighting skills ready so that he can tag Burns in the puss each time he grabs him in a clinch and tries to smother Mitchell’s offense. That’s how you take care of Burns. You can’t just let him clinch like that without making him pay each time.