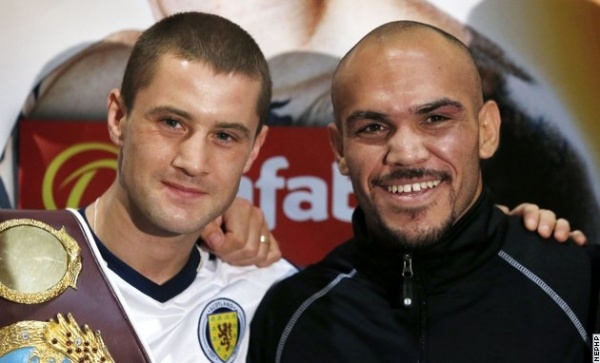 Scottish boxer Ricky Burns says he would be happy to give Raymundo Beltran a rematch once his broken jaw has had time to recover.

The WBO lightweight champion suffered the injury in last month’s controversial draw with the Mexican in Glasgow.

The challenger looked to have done enough to beat Burns when the pair met at the SECC arena in Glasgow and had the Coatbridge boxer on the floor in the eighth round.

However, the judges could not agree on the winner, allowing the 30-year-old home favourite to keep the belt via a split decision draw.

My jaw is on the mend. It’s healing the way it should. I’ve been doing light training and hopefully I’ll be back boxing in five to six weeks.

‘The pain was unbelievable and the surgeon said it was stupidity. It’s just the way I am. If I’m in a fight, I’ll fight to the end.’

Burns admitted that he considered his future in the sport in the immediate aftermath of his injury, which was sustained in the second round of the September 7 contest.

‘I don’t know how I managed to get through it,’ he said. ‘The pain was unbelievable and the surgeon said it was stupidity. It’s just the way I am. If I’m in a fight, I’ll fight to the end.

‘I think people knew that wasn’t the real me in that ring. I was in survival mode from the second round.

‘I wouldn’t say it crossed my mind that I would never fight again but I was thinking ‘is the same thing going to reoccur?’’

A second fight with Beltran is not the only possibility for Burns, who is part of promoter Eddie Hearn’s Matchroom stable.

Undefeated American Terence Crawford remains the WBO’s mandatory challenger, while a third option would be a unification fight. IBF champion Miguel Vazquez would be the likely opponent if Burns’ camp went down that route.

A planned meeting between Burns and Vazquez in London was cancelled at short notice in March, with the Mexican IBF champion citing a viral infection.