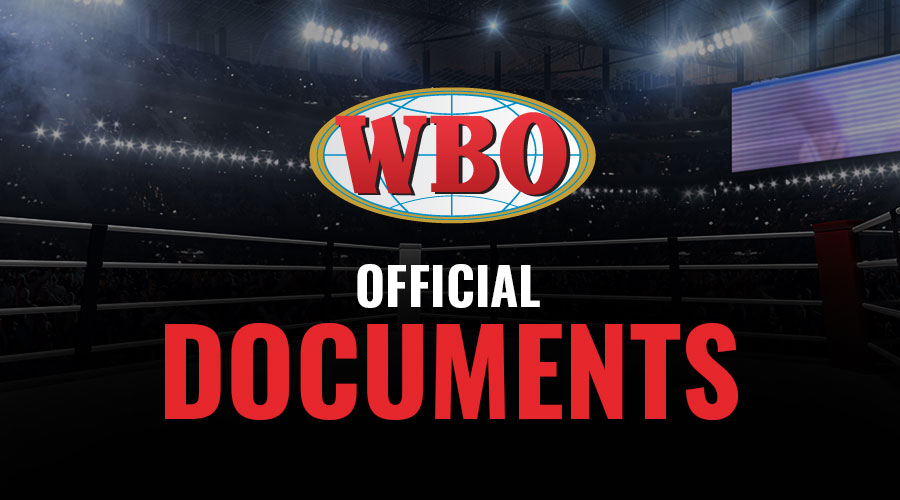 As you know, I represent Jack Catterall in respect of his participation in World Boxing Organization (“WBO”) activities as a professional boxer.

So that we may determine the next steps we will take in respect of challenging the recent (March 2022) unfortunate WBO change in ranking of Mr. Catterall by the WBO (we note this was done without response to our prior outreach or seeking any additional information from us or Mr. Catterall), please provide answers to the following questions:

2. A specific explanation of how Teofimo Lopez (a lightweight) came to be rated higher than Mr. Catterall (a light welterweight), in a different weight class than in which Mr. Lopez was previously ranked, when Mr. Lopez lost his last fight, in the lightweight division, handily in November 2021, while Mr. Catterall lost his last fight, in the light welterweight division, in March 2022, in a controversial decision (where an official was demoted as a result and where sustaining Mr. Catterall as the division’s mandatory challenger was supported by the licensing body for the fight (the British Boxing Board of Control));

3. A list of the names, email addresses, and business addresses of the WBO’s officials who vote on the ratings of boxers;

4. Identification of all communications between the WBO and any third parties, including but not limited to any promoters, in particular Top Rank and Bob Arum, and any other Top Rank principals or employees, concerning the ranking of Messrs. Catterall or Lopez in the past 60 days, whether written, electronic, or verbal; and

5. The written process by which Mr. Catterall may appeal the decision of the WBO in respect of his ranking.

We look forward to receiving the requested information as soon as possible but not later than by March 28, 2022.

Of course, on behalf of Mr. Catterall, I must reserve all of his rights.

From: Law Office Of Peter Aguayo

On behalf of Jose Ramirez and Rick Mirigian, they submit the following:

Jose Ramirez questions the World Boxing Organization’s (WBO) March 14, 2022 rankings, placing him as the number 4 contender under the 140 pound junior welterweight division. Based on the WBO’s criteria, Ramirez should be in the top two of the rankings, if not number one.

The first criteria under the WBO’s guidelines and ABC guidelines for objective and consistent criteria for the ratings of professional boxers is “Positive professional record with special emphasis on boxer’s recent activities.” Ramirez has a 27-1 record. This is 11 more wins than Teofimo Lopez, currently the number 2 contender. Ramirez’s most recent fight was a win against Jose Pedraza. The most recent fights for Lopez and Jack Catterall (number three contender) were losses. Ramirez has proven he can come back from a loss (only loss was against current champion Josh Taylor). That win was against Pedraza, the number 6 contender at the time (he was at 5 but dropped in the rankings when Lopez moved to junior welterweight). Lopez and Catterall have not proven they can bounce back from their first loss.

The third criteria is that “the boxer shall have competed in at least (2) bouts scheduled for ten rounds or (4) bouts scheduled for eight.” There is no clarification if this is for total fights or specific to the weight division the boxer is ranked in. Teofimo Lopez has not fought at 140 pounds. It is unknown if he will be the same fighter at the higher weight class.

The sixth criteria is quality of competition. Ramirez fought Maurice Hooker when Hooker was the WBO champion at the time. Pedraza at one point held titles for the WBO, IBF, and IBO. Ramirez defeated Viktor Postol, a former WBC title holder. He defeated the current number 5 contender Jose Zepeda. Catterall has fought and won against regional title holders, but his only fight with a champion was a loss to Taylor. Lopez had one successful title defense as IBF lightweight champion. While Ramirez successfully defended his WBC 140 pound title 4 times and the WBO once.

The ninth criteria is good relationships within the community. Ramirez is active in the community raising money for children’s hospitals and cancer wards. He visits patients at the hospital or in recovery and has given them such items as a mini WBO belt. He made public service announcements about taking COVID-19 precautions as his community was being greatly affected by the virus.

For the foregoing reason, under the criteria laid out by the WBO, Jose Ramirez should be ranked in the top two of the WBO rankings. He has represented the WBO and its belt with the utmost respect that it deserves. If the belt is vacated by Josh Taylor, Ramirez meets the criteria to be among the two Best Classified Contenders Available and negotiate a contract for the World Championship as described under section 20 of the WBO regulations.