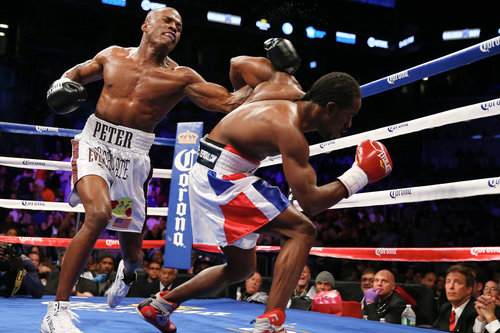 Fernando Guerrero was game, but Peter Quillin was just too strong, flooring his challenger four times en route to a seventh round stoppage in Brooklyn.

Peter Quillin successfully defended his WBO middleweight title tonight in Brooklyn, overcoming a good effort from Fernando Guerrero to largely dominate the fight, scoring four knockdowns on his way to a seventh round stoppage at the Barclays Center.

Guerrero (25-2-1, 19 KO) was down two times in the second round, barely surviving the frame (a third knockdown could have been called), and he lost arguably the first five rounds, maybe winning only the fourth.

In the sixth, though, Guerrero started landing some shots, and his commitment to trying to find a big shot to bring himself back into the fight led to his fighting with reckless abandon, and when a guy is clearly outgunned, that’s the most you can ask of them, and usually, it’s more than you should ask of them. This is, after all, The Hurt Game, where things Hurt.

But to Guerrero’s credit, as soon as he knew Quillin’s power could hurt him, as soon as he figured out how hard it was to get offense in, and how well Quillin could counter, he didn’t turtle up, or run, he threw caution to the wind and fought.

After a good sixth, though, it came crashing down, as Quillin (29-0, 21 KO) decked him two more times, with the referee stopping the bout on the second knockdown.

Our live coverage from the Barclays Center continues here, with Garcia vs Judah up next. Strap in.