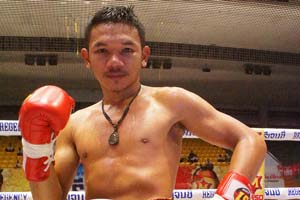 Pungluang Sor Singyu recently captured the WBO bantamweight crown for the second time when he stopped Japanese contender Ryo Akaho in two rounds on August 7 in Ratchaburi, Thailand. The big punching Thai raised his record to 51-3, 35 KOs with the win. Pungluang took some time to talk with Fightnews about recapturing the crown, his past losses, fighting abroad and his future in the ring.
(A special thanks to Dr. Siraphop Ratanasuban of One Songchai Promotions for his assistance with translating for the champ!)

Pungluang, congratulations on regaining the WBO Bantamweight title. How does it feel to be a world champion for the second time?

I am very happy.

Did you expect to score such a quick KO against your recent foe Ryo Akaho in winning the belt again?

No, Ryo is a good boxer. I just got lucky.

I want to go back to your start in boxing. You turned professional at age 16. Did you take the traditional road for many Thai boxers and begin in Muay Thai?

Why did you decide to convert over to “Western” style boxing?

The promoter gives me good money and promised to make me world champion, as long as I train well.

In becoming WBO champion twice- you’ve won a vacant belt both times. Do you follow your co-champions Shinsuke Yamanaka (WBC), Randy Caballero (IBF), Juan Carlos Payano (WBA) and if so, would you be interested in unifying with any of them, to try and be recognized as the best in the division?

I would like to fight close by my country such as Japan first. For far away country, I am not so sure I want to go. I prefer to fight in Thailand. All three of your losses have been on the road (Stephane Jamoye- SD10 in Belgium, Paulus Ambunda- UD 12 in Namibia and Tomoki Kameda- KO by 7 in the USA). Do you blame the long distance travel as a factor in those defeats?

Yes, I don’t like to fight overseas much. I love my hometown family to cheer me. I want to build more experience while I fight in Thailand first.

Do you feel the two decision losses- one split in Jamoye’s hoe town and one close unanimous in Ambunda’s home town were fair or did you feel you did enough to win?

I feel I was a bad boy. I did not train well and didn’t get ready for those fights.

If the money is right, will you be willing to travel abroad for more fights or would you rather have several fights at home where you feel more comfortable?

I would like to have several more fights at home to be more comfortable first.

In the Kameda fight, the scores were dead even after six rounds, with each of you leading on one score card and a draw on the third. You were stopped in the seventh round. How frustrating was that loss in such a close fight?

Yes, I did not train well in that fight. I deserve to lose.

At 27 years old, you are relatively young, but have been fighting for eleven years and have had fifty four fights. Do you feel like you are slowing down at all, or do you still have many years to go?

I feel I am a very young champion. I have a bright future ahead of me. I am in a climbing up period now.

With a 65% knockout ratio, power seems to be a big part of your game. Do you rely on your power to win a fight or do you feel you are a complete boxer?

I think I am power boxer. I love to KO and get audiences excited.

What is next for you in your first defense of your second title reign?

It is up to my promoter Madame Pariyakorn Ratanasuban. I do my job by keep training.

Any final thoughts or words to your fans both at home in Thailand and around the world?

Thank you everyone for cheering for me. I will work hard and not let my boxing fans get disappointed.