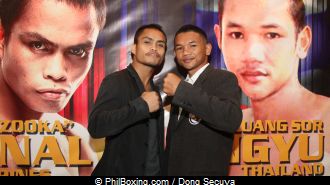 Pungluang Sor Singyu training for a war with AJ Banal Pungluang Sor Singyu (42-1, 27 KO’s), Thailand’s No. 2 world ranked bantamweight is training with the Army in the ChoNburi province in preparation for his battle for the vacant WBO bantamweight title with No.1 ranked AJ “Bazooka” Banal (28-1-1, 20 KO’s) on October 20.

The title fight will be held at the Mall of Asia Arena along Roxas Boulevard and will be telecast by the giant broadcast network ABS-CBN over Channel 2.

Siraphop Ratanasuban, vice president of the  of the huge  OneSongchai Promotions outfit in Thailand told the Manila Standard that Pungluang “is now training very hard” in an army facility in Chonburi province and is being trained by a former Pan Asia Boxing Association champion whose name he did not mention.

He said Pungluang is sparring with several Thai boxing champions.

Ratanasuban described Pungluang as “a  fighter with a big heart and very disciplined.”

Banal has also been training rigorously for his second chance at a world title having lost by a stunning 10th round knockout to Rafael “El Torito” Concepcion in a bout for the WBA super flyweight Interim title in Cebu on July 26,  2008 while leading on the scorecards of all three judges at the time of the stoppage.

Banal has won eleven fights in a row since the loss to Concepcion. He is coming off a comfortable eighth round unanimous decision over Ruben Manakane in a tune-up fight last July 21 in Dumaguete City.

Pungluang is coming off his own tune-up fight last July 26 in Thailand when he defended his WBO Oriental title with a 5th round TKO over Filipino Ricado Roa.