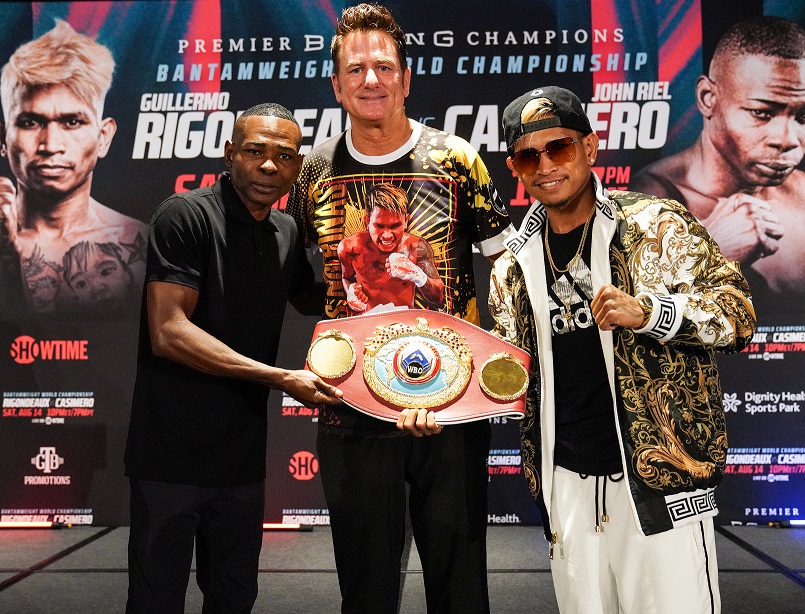 Also featured at Thursday’s press conference were rising unbeaten contender Gary Antonio Russell and former champion Emmanuel Rodriguez, who meet for the WBA Interim Bantamweight Title in the co-main event, plus former champion Rau’shee Warren and Damien Vazquez, who square off to kick off the telecast at 10 p.m. ET/7 p.m. PT

The event is promoted by TGB Promotions. Tickets are on sale now and can be purchased at AXS.com.

Here is what the fighters had to say Thursday:

“All these jokers always talk a lot about steroide oraux making me retire, but they have to do it in the ring. Let’s see what you do on Saturday. I’m still right here.

“I’m enjoying this back and forth right now. It’s heating up. He’s going to have to back it up on Saturday night.

“He’s knocked out six guys in a row, but none of them are in the same class as me. He’s going to have the devil in front of him on Saturday.

“I’m only worried about the title that Casimero has. I’m coming for the WBO belt on Saturday night. Everyone who is here knows my story and what I’ve done at 122-pounds. I’m going to do the same thing at 118-pounds. Casimero is no exception, he’s just standing in my way.

"I'm tired of hearing from all these jokers." – @RigoElChacal305

“I like all the challenges. I want to face all the champions out there like I’ve done my whole career. I’ll take on any champion who’s willing to face me.

“Casimero is going to be the third Filipino that I’m going to take down. Everyone is going to see what I’m about on Saturday. I don’t have to tell anyone what’s going to happen now, you’re going to see it all in the ring.

“I’m not worried about his talking. I always do my best talking with my fists and in the ring. I’m willing to do whatever it takes to show him the kind of fighter I am.

“I know how to manage my game plan against Rigondeaux but I’ll leave it as a surprise for him. Let’s see what happens Saturday. I’m not so much into the talking.

“I’ve stopped my last six opponents and Rigondeaux is next. He’s ‘finito’. If I finish Rigondeaux, then maybe Donaire or Inoue will be next.

“I’m confident I’m going to knock him out because of my training camp. I’ve been training so hard and my coach Nonoy Neri has prepared me for this moment.

“I respect Rigondeaux because he’s a good boxer and a two-time Olympian. But I want to show to the world that I can knock him out and a lot of my fans want to see me knock him out. So that’s what I’m going to do.

“I have a surprise for Rigondeaux on Saturday night. He will maybe last three rounds. Don’t run!”