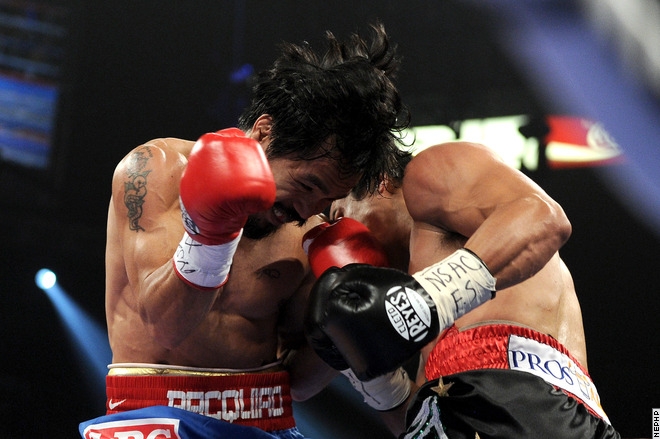 LAS VEGAS, MGM GRAND — Manny Pacquiao escaped again, in a decision that left Juan Manuel Marquez fuming once again. The Filipino sensation was taken to the limit Saturday night before winning a majority decision that infuriated Marquez and most of the sellout crowd at the MGM Grand Arena. While close, the win helped Pacquiao continue a remarkable run that has made him the most exciting fighter in the sport.

In a bruising battle against a counterpuncher who was both accurate and fast, Pacquiao needed the final round on two scorecards to pull out the win. He got it, even though a third judge scored the round in favor of Marquez. As boos — and cans and bottles — rang down on the ring, Pacquiao celebrated another victory and another huge payday. One ringside judge had it a 114-114 draw, while two others favored Pacquiao by 115-113 and 116-112.

It was the third close fight between the two men, though this one was fought at 144 pounds instead of 125 as was their first fight seven years ago. That fight was a draw, while Pacquiao won a split decision in the second bout in 2008 at 130 pounds.