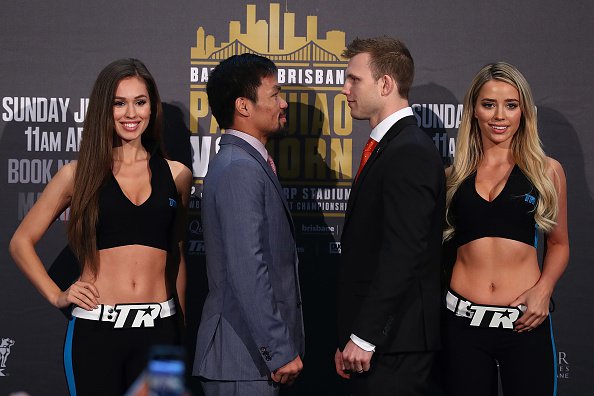 Manny “Pacman” Pacquiao, boxing’s only eight-division world champion and the only sitting Senator to capture a world championship belt, will add another first to his burgeoning list of Hall of Fame-caliber accomplishments with his live debut on ESPN and ESPN Deportes (also streaming live on the ESPN app) on Saturday, July 1 at 10:00 p.m. ET. The fight will be called ringside by ESPN commentators Joe Tessitore and Teddy Atlas. They will be joined by guest analyst Timothy Bradley, Jr., a former two-division world champion recently trained by Teddy Atlas who has met Pacquiao three times in the ring, winning their first match in a decision. ESPN Deportes will pair Jorge Eduardo Sanchez and Juan Manuel Márquez to call the main event in Spanish, with prefight commentary from Pablo Viruega, Leopoldo Gonzalez, Claudia Trejos and Juan Manuel Márquez. Pacquiao, the Boxing Writers Association of America’s reigning Fighter of the Decade, will defend his World Boxing Organization (WBO) welterweight crown against undefeated No. 1 contender and Brisbane’s favorite son Jeff “The Hornet” Horn at Suncorp Stadium in Brisbane, Australia. This will be the first time Pacquiao has not fought on pay-per-view since Sept. 10, 2005, when he stopped Hector Velazquez in the sixth round — 12 years and four weight divisions ago.

ESPN’s coverage of “The Battle of Brisbane” will begin on Friday, June 30th, and includes live coverage of the Pacquiao and Horn weigh-in at 7 p.m. ET within SportsCenter on ESPN and within Golpe a Golpe on ESPN Deportes.  During the week of June 26, classic Pacquiao fights will also be available on demand and streaming via the ESPN app, on both ESPN and ESPN Deportes, including Pacquiao vs. Ricky Hatton (5/2/2009), Pacquiao vs. Juan Manuel Márquez (11/12/11) and Pacquiao vs. Tim Bradley (4/12/14).